India's T20 preparations are underway in full swing. After being beaten by South Africa at home, they regained their confidence, and their top ranking, by thrashing Australia 3-0 in the latter's own backyard. They suffered a minor setback when they went down to Sri Lanka in the opening T20 at Pune

India's T20 preparations are underway in full swing. After being beaten by South Africa at home, they regained their confidence, and their top ranking, by thrashing Australia 3-0 in the latter's own backyard. They suffered a minor setback when they went down to Sri Lanka in the opening T20 at Pune, quite against expectations. But they got back among the winning ways soon enough by triumphing in the next two games rather comprehensively, and with it capturing the series. India will now head into the Asia Cup T20 tournament, the final preparation for the World T20 on a highly confident note.

India gained a lot of positives from the series win, even though it came against a depleted Sri Lankan side. One of the biggest plusses to come out of the series was the form of opener Shikhar Dhawan. He had done reasonably well in Australia, but going into the Sri Lanka series did not have a T20 fifty against his name. Dhawan set the record straight in that aspect, at Ranchi, and also batted according to the circumstances at Vizag. Dhawan doesn't have a great technique so he cannot survive playing defensive. It seems the team management has realised the same, and Dhawan has been given a free hand to go on an all-out attack. So far, the plan is working.

The performance of left-arm seamer Ashish Nehra was also impressive. The veteran bowler's comeback is clearly aimed at the World T20. In Australia, he couldn't quite get into his groove. But, in familiar conditions at home, he made an impression. It helped that Sri Lanka had a rather inexperienced batting line-up. MS Dhoni experimented with Jasprit Bumrah, getting him to bowl only in the second half of the innings. And Bumrah impressed here as well, getting in his yorkers and pacy deliveries while keeping things quiet. Ravichandran Ashwin's success was no surprise, but the team think tank would be extremely pleased with the kind of success he achieved.

Amidst all the positives, the lack of batting practice for Yuvraj Singh remains a worry. Yuvraj played a nice cameo in the final T20 in Australia, but he did not get many chances to bat against Sri Lanka. In the second game, his first-ball duck was part of a Thisara Perera hat-trick. MS Dhoni has expressed his inability to send Yuvraj to bat higher since the top and middle order is in great form, and he would not like to disturb the combination. While the same is true, it is equally significant that Yuvraj gets some runs under his belt, before the World T20. After all, India are looking at him as the number five batsman in the order, which is a significant position in itself. 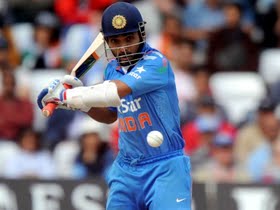 Another puzzle in the pack is Ajinkya Rahane. He played in all the games against Sri Lanka, but that was only because Virat Kohli was rested. Once Kohli returns, India will find it difficult to slot in Rahane. The only way he can get in is perhaps if some batsman gets injured. Alternately, he could open in case the openers are struggling, but as of now that seems a bit far-fetched. Another option is to bring him in at number five, in case Yuvraj struggles in the tournament. Although, Rahane will find it difficult to get a look in, it is a sensible move to have him in the team considering the versatility he offers.