Fast bowler Jasprit Bumrah has earned his maiden Test call-up, after being named in the 17-member squad for the three-Test series against South Africa

Fast bowler Jasprit Bumrah has earned his maiden Test call-up, after being named in the 17-member squad for the three-Test series against South Africa, starting next January. Wicketkeeper-batsman Parthiv Patel is also back as back-up wicket-keeping option for Wriddhiman Saha.

India's chairman of selectors MSK Prasad said about Bumrah's selection, "If you see his performance in the last 18 months, he's been phenomenal. He's been sensational and has done outstandingly well in both one-day 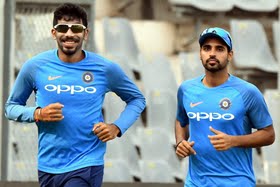 “Considering the Ranji Trophy he played last year he bowled brilliantly in the whole season, we have no doubts. It is a unanimous choice and there is no doubt in picking Bumrah because he definitely adds variety to our pace attack. And considering the nature of wickets there, it will definitely suit his bowling,” Prasad added.

On Parthiv's recall, Prasad explained, "When we had given an opportunity against England he did beyond our expectations. We all know that Wriddhiman Saha is the side's No.1 wicketkeeper, we still need to have a back-up wicketkeeper. Right now he is the next-best wicketkeeper that we have in India. His domestic performances are also equally good."