India will be pleased to begin Australia tour on winning note

Results in practice games do not matter a lot. After all, they are just matches against teams with upcoming, relatively inexperienced players, allowing the visiting side to get idea about the conditions that would prevail during the main contests. In India's case though, it is not all that simple.

Results in practice games do not matter a lot. After all, they are just matches against teams with upcoming, relatively inexperienced players, allowing the visiting side to get idea about the conditions that would prevail during the main contests. In India's case though, it is not all that simple. They have been embarrassed in warm-up matches in the past, and it has severely impacted their psyche going into a big series. The reverse has been true as well. During Australia's tour of India in 1998, Mumbai defeated the Aussies, and India went on to dominate the series.

In the above context, India's victory over Western Australia, even with the side devoid of their star players, was a crucial one. It will give them some much-needed confidence early in the tour. The 74-run triumph in the practice T20 at Perth could be a boost for India since they would kick off the ODIs with the first match at the same venue at the WACA. India should look to take the confidence gained from the comprehensive victory into the one-dayers as well as the T20s. The last time India visited Australia during a long tour, they were luckless. MS Dhoni and his men would be keen to make amends.

The biggest positive for India from the T20 victory over Western Australia was the impressive performance of Barinder Sran. The left-arm pacer was a surprise choice for the tour in spite of the fact that he has done well on the domestic circuit. Indian selectors usually ignore blooding youngsters in big series', like ones in Australia and South Africa. Failures in such tough conditions have finished off careers in the past. Thus, the selection of Sran for the Australia tour can be seen as a bold move. It shows that the selectors have faith in his talent, and they would be happy that Sran has made a striking first impression.

The performances of Shikhar Dhawan and Virat Kohli in the first match on tour will also please the team. Dhawan had a great time in the World Cup last year, but struggled against Australia in the preceding series. He will be thus looking to impress this time around. The left-hander has begun the tour well, and looked in good touch during his 74. Kohli also batted without a lot of trouble. He loves playing in Australia as the ball comes on to the bat, and once again demonstrated his liking for the conditions. Rohit Sharma failed following an error in judgement, but he along with the Delhi duo could be the key to India's fortunes in the series. 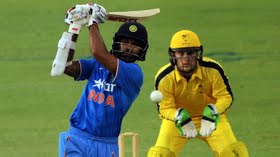 India also made an impression with the ball. Apart from Sran, the spinners also made a mark. The slow bowlers are not expected to play a wicket-taking role in Australia, but Axar Patel and Ravindra Jadeja did claim a couple of wickets. Both the left-arm spinners looked penetrative on the surface, a lively pitch which was more in favour of the fast bowlers. Overall, it was a good outing for the Indians, and they would be keen to continue their good work in the second practice match as well.