Kolkata Knight Riders suffered their second straight defeat in IPL 5 after going down by 22 runs against hosts Rajasthan Royals at the Sawai Mansingh Stadium in Jaipur.

The visitors lost the plot in the run chase when three wickets went down in consecutive deliveries between the 2nd and the 3rd overs. KKR from 8 for 3 limped slowly after that. Their fortunes ended in the 11th over when match winner Yusuf Pathan got a leading edge to his big pick up shot which carried to deep mid wicket.

KKR got into a disastrous position of 94 for 7 in the 15th over and eventually got bowled out for 142 in 20 overs. Manoj Tiwary scored a valiant 59 from 47 balls with 7 fours but unfortunately lacked any support at the other end. Medium pacer Amit Singh did the damage for the Rajasthan Royals early on taking two key wickets. Left arm spinner Ankeet Chavan who opened the bowling came up with superb figures of 2 for 23 in 4 overs while Kevon Cooper claimed 3 for 28. Brad Hodge got the Man of the Match for his 44 from 29 balls. 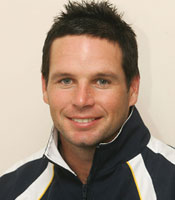 Brett Lee bowled well for the KKR taking 2 for 29 in 4 overs. Sunil Narine and Rajat Bhatia also bowled on a tight leash to keep the scoring under a check.

Toss and Teams: Kolkata Knight Riders have won the toss and asked hosts Rajasthan Royals to bat first in Match 7 of the IPL 5 at the Sawai Mansingh Stadium in Jaipur. West Indian off spinner Sunil Narine makes his debut for the KKR coming in place of fast bowler Marchant de Lange. The Rajasthan Royals have retained the same team that won against Kings XI Punjab at this same ground.