Chris Gayle, who is supposed to be the major attractions of the Sri Lankan Premier League has disappointed the tournament organizers and of course his frachise team Uva Next by ruling himself out with an injury!

Chris Gayle, who is supposed to be the major attractions of the Sri Lankan Premier League has disappointed the tournament organizers and of course his frachise team Uva Next by ruling himself out with an injury! Gayle is said to be struggling with a groin injury which he first sustained during the Bangladesh Premier League. Since then Gayle has played in the IPL and then made an international comeback with the West Indies.

It’s a huge blow for the SLPL as it desperately needed to catch the eye of millions of TV viewers for its future survival by showing an entertaining and destructive Twenty20 batsman like Chris Gayle. Uva Next, one of the teams taking in the part in the SLPL had Chris Gayle as its icon player and also the Skipper. The franchise has now been forced to replace Chris Gayle with West Indies veteran Shivnarine Chanderpaul. 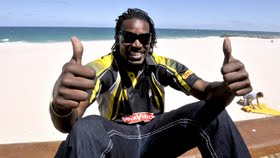 The SLPL is having issues with few more overseas players as well in some way or the other. West Indian fast bowler Fidel Edwards failed to get a ‘no objection certificate’ from the WICB in taking part in the SLPL. The reason for Fidel Edwards’ withdrawal from the SLPL is that the West Indies want him fresh for its ICC World Twenty20 2012 campaign. Meanwhile, Bangladeshi all-rounder Shakib-al-Hasan will not be featuring in the tournament because of his Board not allowing him to play as it wants him to rest his injured left knee ahead of the World Twenty20.

Two more overseas players – Pakistan’s left-arm spinner Abdur Rehman and West Indian batsman Marlon Samuels are unlikely to take part in the SLPL. We will have to see if the SLPL can become a hit with its existing overseas players along with the Sri Lankan players. Remember, one of the biggest stars of Sri Lankan Cricket – Kumar Sangakkara too is not going to play this tournament following a broken finger during the ODI Series against India. And last but not the least, none of the Indian players are there in the SLPL with the reasons being obvious that the BCCI doesn’t want any other leagues to give even a semblance of competition to its own IPL.