SL vs WI 2nd Test Day 1 report: On a lively pitch, West Indies' bowlers put up a rare dominating show as the hosts were bowled out for 200 on the opening day at the P. Sara Oval.

On a lively pitch, West Indies' bowlers put up a rare dominating show as the hosts were bowled out for 200 on the opening day at the P. Sara Oval. The bowling trio of Kemar Roach, Jason Holder and Jerome Taylor combined nicely to rock the Sri Lankans early. Debutant left-arm spinner Jomel Warrican then starred with four wickets as the West Indies thwarted a mini-comeback from the Sri Lankan middle and lower order. Having been bowled out for 200, Sri Lanka then struck early as Rangana Herath trapped Shai Hope lbw. West Indies were 17 for 1 when play ended, trailing the hosts by 183 runs. 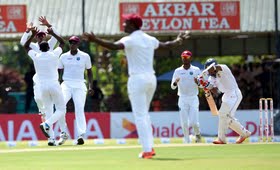 Sri Lanka's batting stumbled against West Indies, first against the pacers and, in the second half of the day, against Warrican, who finished with four wickets in his first innings in Test cricket. They were reviews galore on day one, most of them in the opening session, and a majority of which went in the visitors' favour. Taylor, who had to pass a fitness test at the start of the day, bowled quick, and was rewarded appropriately. With his fourth ball, he had Kaushal Silva with one that first came in, and moved away at the last moment. West Indies had to review the decision to open their wickets tally.

The wicket set a trend of sorts for the day, as West Indies kept reviewing decisions and kept getting the same in their favour. With Sri Lanka, the case was quite the opposite. They had lost half their side with less than hundred on the board, and had it not been for Milinda Sirwardana's fighting half-century, Sri Lanka would not have even reached 200, the score they were eventually bowled out for. Rangana Herath also chipped in with a well-compiled 26 not out, but otherwise, there was not a lot for the hosts to cheer as debutant Warrican brought a swift end to the innings by running through the tail.

The morning session involved a total of five reviews. After the Kaushal Silva decision, Roach had debutant Kusal Mendis caught behind for a nervous 13. Again, the Windies had to seek the help of the third umpire to get the decision. The visitors' skipper Holder then trapped Dimuth Karunaratne lbw for 13. This time the on-field umpire gave him out, and the batsman reviewed the decision, but the original one stayed. By lunch, the hosts were in a troublesome position, having been reduced to 59 for 4. Skipper Angelo Mathews was the last man to fall before lunch. Kraigg Braithwaite took a smart catch at slip off Holder. Again, the third umpire took the final call.

In the second session, Dinesh Chandimal and Siriwardana added 31 for the fifth wicket, and seemed to be staging a mini-recovery when Chandimal played on to Holder on 25 to put Lanka back in trouble at 90 for five. The rest of the innings was a close fight between the Windies bowlers and Siriwardana. He was Lanka's best batsman on the day by some distance, defending the good balls, and also making sure to get the boundaries when the bad balls came along. He danced down the track and hit a huge six to reach his fifty off 76 balls. For West Indies, Warrican bowled well, but it was with a full toss that he got his maiden Test scalp, that of Kusal Perera. The rest of his wickets were well earned though. He ended Siriwardana's resistance, and also claimed the last two scalps.