Following the unexpected reverse at Pune, on a tough batting surface, India roared back to form with a comprehensive victory in the second match at Ranchi on a dry surface

Following the unexpected reverse at Pune, on a tough batting surface, India roared back to form with a comprehensive victory in the second match at Ranchi on a dry surface. After the loss in the opening game, MS Dhoni had commented that the pitch was more English than Indian. He had no such complaints as the action shifted to his home ground. The series though is still level 1-1, and India will need to come up with another competent effort to claim the series. Although the pitch at Vizag is also not expected to offer much to the bowlers, Sri Lanka would be keen to make an impact.

There were plenty of reasons for India to cheer following the triumph at Ranchi. The most important of the lot was the stunning assault Shikhar Dhawan unleashed on the Sri Lankan bowlers. Dhawan played a few attacking knocks in Australia, but he hadn’t scored a T20 fifty going into the Sri Lanka series. The opener would be happy to have taken that monkey off his back. The manner in which he has played in the last few games, it seems there has definitely been a plan put in place wherein he goes on an all-out attack, and Rohit Sharma rotates the strike at the other end. The idea worked to perfection at Ranchi. 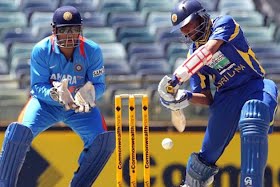 The top four of the Indian batsmen all got starts in the last game, so India should be pleased with that development following the disappointing batting effort in the first match. Rohit batted well again, but he was slower than usual. Also, twice in the series he has been dismissed misreading the pace of the ball. This is one aspect he will be keen to work on. Suresh Raina also batted without much trouble while the decision to promote Hardik Pandya also proved to be a success. If anything, the struggles of Ajinkya Rahane and Yuvraj Singh will be a worry for the Indians.

India’s bowlers also impressed once their batsmen had put up an imposing score on the board. Ravichandran Ashwin yet again proved what a massive asset he is in home conditions, sending back Tillakaratne Dilshan very early in the chase, and continuing his wicket-taking spree. Ashish Nehra had a second good game in a row, wherein he sent back a couple of key batsmen to dismantle the Sri Lankan chase. So impressive were the Indian bowlers, Jasprit Bumrah, who opened the bowling in Australia, was brought in directly in the death overs. He made an impression again, once even breaking the stumps with his yorker.

Sri Lanka will need to recuperate quickly from the Ranchi loss. They will hope that Dilshan has a good game, for when he does well, Sri Lanka often end up winning matches. Danushka Gunathilaka hasn’t looked in any sort of form, so Niroshan Dickwella might have to open with DIlshan at Vizag. Dinesh Chandimal and Chamara Kapugedera are in good form, so that is a definite positive for the visitors. In the bowling, Dushmantha Chameera has been the big plus for them. Also, there is a chance of Jeffrey Vandersay playing ahead of Seekkuge Prasanna. But, changes alone won’t be enough for Sri Lanka to overcome India.