Karnataka vs Bangladesh A Day 1: 16 wickets fall as bowlers dominate

Responding to Bangladesh A's 158, Karnataka finished day one of the three-day match at 163 for 6, a lead of five runs. Shishir Bhavane was unbeaten on 55 and Suchith was on 14 when stumps were drawn

Responding to Bangladesh A's 158, Karnataka finished day one of the three-day match at 163 for 6, a lead of five runs. Shishir Bhavane was unbeaten on 55 and Suchith was on 14 when stumps were drawn. Earlier, Bangladesh A succumbed to pressure as Prasidh ran through their batting line up. Bhavane was the star of the day with the bat for the hosts, hitting 8 fours and a six in his 88-ball stay.

The Karnataka innings did not get off to a great start. Mayank Agarwal was bowled by Saqlain Sajib having hit a fluent 16. The other opener Ravikumar Samarth reached 25 when he was trapped lbw by Shugavata Hom. The next two wickets also fell quickly with Robin Uthappa and C Gautam both falling to the guile of Sajib. Abhishek Read batted well for his 28, but was trapped lbw by Hom. Gopal was the sixth wicket to fall for Karnataka, caught by Jubair off Hom for 17. Bhavane and Suchith ensured there was no further damage.

Earlier, despite half-centuries from Hom and Litton Das, Bangladesh A were bowled out for a disappointing 158 batting first at Mysore. Hom top-scored with 55, and Das made exactly 50. But, disappointingly, neither of the two carried on to make a bigger score. And had it not been for Hom, they wouldn't have reached even 150. Hom's 55 came from 65 balls, with 7 fours and a six. Das, on the other hand, slammed a run-a-ball 50, with 11 mostly crisp hits to the fence. 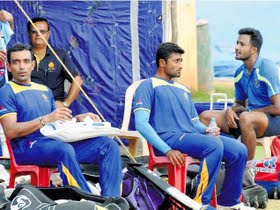 Taking away the performance of Hom and Das, Bangladesh A did not have much to offer. Batting first, they were seeking a good start, but Rony Talukdar's poor run continued as he was sent back by Prasidh very first ball of the second over, and his first. It was the worst start the visitors could have hoped for. And, there were no improvements. Prasidh clean bowled the other opener Anamul Haque for a struggling 5. At the other end, skipper Mominul Haque was sent back by HS Sharath for 1, caught by Shreyas Gopal.

Even as Das was getting runs from one end at a brisk pace, wickets kept tumbling at the other. Soumya Sarkar, who usually opens, was sent down the order, but the demotion did not work. He was dismissed by Prasidh without scoring. The same bowler went on to add the scalp of the dangerous Nasir Hossain, having him caught behind for 8. Das' resistance also ended when Suchith had him caught behind. Kamrul Islam and Jubair Hossain also fell in single-figure scores to Prasidh and Gopal respectively. And, when Hom's resistance ended, Bangladesh A were just nearing 150. They crossed it, but did not last long after that. Prasidh finished with 5 for 49 for Karnataka.