India pulled off a remarkable fightback on an eventful third day’s play at Auckland to find themselves with a slim chance of a win.

India pulled off a remarkable fightback on an eventful third day’s play at Auckland to find themselves with a slim chance of a win. The tourists overcame the disappointment of their first innings by cleaning up New Zealand’s 2nd innings for just 105 in 41 overs. By the close of play, India chasing a tall target of 407 are quite healthy at 87 for 1. As many as 17 wickets went down on Day 3 at the addition of 264 runs!

Shikhar Dhawan, who has been searching for form, survived the day on 49* from 70 balls with 5 fours. At the other end is Cheteshwar Pujara, who got to 22* from 61 balls. The only man to be dismissed was Murali Vijay, who was caught down the legside for 13 by the keeper to a harmless delivery from Southee. 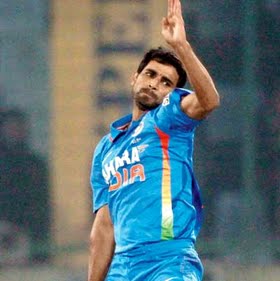 Update of New Zealand 2nd Innings: New Zealand folded quickly for a paltry 105 in 41.2 overs to bring India back in the match. The visitors though face an uphill task of chasing 407 in the final innings on a pitch that has dried out and is taking sharp turn.

It was the Indian speedsters who did the damage though, led by Mohammad Shami. Bowling a fuller length, Shami trapped Hamish Rutherford lbw for a duck in the very first over of the innings with one that skidded through. Shami then had the other opener Peter Fulton driving a full ball uppishly and straight to covers. Kane Williamson was out cheaply, caught by the diving Jadeja at short mid wicket in an uppish flick off Zaheer. By lunch, New Zealand slipped to 15 for 4 in the 8th over with Brendon McCullum run out trying for a risky second run from squareleg. The combined brilliance from the fielder Jadeja and Ishant Sharma who collected the sharp throw resulted in McCullum short of his crease at the bowling end.

India continued to hunt for wickets after lunch and at the same time strangled the scoring rate. Corey J Anderson was bowled cheaply by a Shami inducker with one that nipped back sharply. Ross Taylor, who was the only Kiwi batsman scoring any runs in this innings was caught brilliantly by a diving Rahane at gully for 41. Taylor was out playing a flashy cut off Zaheer.

New Zealand from 63 for 6 collapsed to 105 all out with Ishant Sharma joining the party adding three wickets to his first innings 6-wicket haul.

Update of India 1st Innings: It took just the 21 overs for the Kiwis to bundle out India for a modest first innings total of 202. New Zealand with that have bagged what could be a match-winning first innings lead of 301 runs. Their Captain Brendon McCullum though has decided not to enforce the follow on.

India’s woes began very early in the morning with Ajinkya Rahane pushing away from his body to a Southee outswinger after adding just three runs to his overnight score of 23. Rohit Sharma was dismissed six balls later, inside edging his tentative drive off the skiddy Trent Boult onto the stumps. Rohit added only five runs to his overnight score of 67.

There was hardly any resistance from Skipper MS Dhoni who got out in his customary fashion, pushing the ball without moving his feet and nicking to the keeper. Neil Wagner, the Kiwis’ second left-arm quick got the Indian Captain and followed it with the wicket of Zaheer Khan. Ishant Sharma and Mohammed Shami fell in quick time leaving Ravindra Jadeja stranded on 30*.

Neil Wagner was the most successful bowler taking 4 for 64 while the other two quicks Southee and Boult took three wickets each.