Bangladesh suffered a heavy defeat of 59 runs at Pallekele against the Black Caps. It was just too much for the Bangladeshis to chase the target of 192 courtesy of Brendon McCullum century.

Bangladesh suffered a heavy defeat of 59 runs at Pallekele against the Black Caps. It was just too much for the Bangladeshis to chase the target of 192 courtesy of Brendon McCullum century. Middle order batsman Nasir Hossain was the only player to come good with an attractive knock of 50 from 39 balls with 6 fours and a six.

Most of the Bangladeshi batsmen perished quickly because of the scoreboard pressure. Kyle Mills rocked them with three early wickets which set tone for an easy Kiwi win. Tim Southee finished the match with superb figures of 4-1-16-3. Nathan McCullum also had a great day taking 1 for 15 in 4 overs. 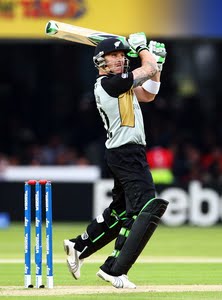 New Zealand Innings: New Zealand piled up a huge total of 191 for 3 courtesy of a blistering century from Brendon McCullum. With this knock of his, McCullum became the only batsman to score more than one century in T20Is. The New Zealand Wicket Keeper batsman’s score of 123 (from 58 balls with 11 fours and 7 sixes) also became the highest individual score in T20I history.

For starters, Bangladesh had a promising start when Abdur Razzak cleaned up Martin Guptill’s stumps with an arm ball in the 4th over with New Zealand at 19 for 1. It was modest going for the Kiwis until the 10th over but with plenty of wickets in hand and through the persistent hitting from Brendon McCullum, Bangladesh were staring at a huge target.

Brendon McCullum single handedly powered the Kiwis to the intimidating total of 191 for 3. The other two batsmen who spent some time in the middle didn’t come up with the same result. One of them was James Franklin, who opened the innings and got 35 from 36 balls with 2 fours and a six. Towards the end, Ross Taylor faced 12 balls but only to score 14*. Despite McCullum’s carnage, Mashrafe Mortaza with 4-0-26-1 and Abdur Razzak with 4-0-28-2 managed decent figures.

Toss and Teams: Bangladesh have won the toss and asked New Zealand to bat first in the Group D Match of the ICC World T20 2012 at Pallekele. The weather at this venue isn’t promising and the groundstaff were ready with the covers when the toss was happening.

The pitch for this match is expected to take turn because of its dry nature and the cracks on the surface. The pitches at Hambantota and Colombo look to be totally in contrast to the slow and dry surface at Pallekele.