A comprehensive victory for the Mumbai Indians against Sunrisers Hyderabad by nine wickets in Hyderabad helped Indians to jump on the second spot on the points table.

A comprehensive victory for the Mumbai Indians against Sunrisers Hyderabad by nine wickets in Hyderabad helped Indians to jump on the second spot on the points table. 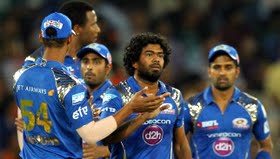 Opting to bat first, Sunrisers Hyderabad could only manage 113 before getting bundled out in 20 overs. Throughout the season, SRH were heavily relied on the openers. Orange cap holder, David Warner and his partner Shikhar Dhawan both failed to make any kinds of contribution in this game and got out cheaply. Last match here Moises Henriques and Eoin Morgan did try to get their eye in but that too didn’t happen as their slow start was soon ended. Lokesh Rahul looked little fluent and scored 25 runs with the help of two boundaries. Apart from him no any batsmen looked comfortable at the crease. Dale Steyn played a little cameo of 19 runs in the end to finish the Sunrisers inning on 113.

Mitchell McClenaghan was the pick of the bowler for the Mumbai Indian. He claimed the wickets of Warner, Morgan and Bhuvneshwar Kumar. Malinga and Suchith got two wickets each whereas Harbhajan and Pollard also chipped in with a wicket a piece.

Chasing a modest total of 114 runs, Mumbai Indians made a blitzing start to their inning. Both Simmons and Pathiv played their shots at ease and never looked in trouble. They were very superior against Dale Steyn and didn’t allow him to settle in. Dale conceded 27 runs in his three overs in a match were asking rate was less than six runs per over. Both openers added 106 runs before Karn Sharma send Simmons back to the pavilion. Simmons hit four fours and two sixes in his 48 runs inning. Parthiv was even more attacking than Simmons as he completed his fifty in just 35 deliveries and helped Mumbai Indians to get a comfortable victory against Hyderabad by nine wickets.

Bowlers from Hyderabad had very little to cheer about as only one wicket of Simmons fell. Karn Sharma took that wicket but he was very expensive and conceded too many runs.

After four straight losses, Mumbai Indians came back strongly and they not only reached the playoffs but they made sure that they will finish the league stage as second topper. Now they will face Chennai Super Kings in the first Qualifier.

Man of the Match: Mitchell McClenaghan