He needs to carry on playing that shot but he needs to pick better balls: Vikram Rathour on Virat Kohli’s drives

Team India’s batting coach Vikram Rathour has backed captain Virat Kohli to continue playing his drives outside off stump. However, he agreed that the skipper will need to pick the right balls to drive. Kohli got out playing loose wafts outside the off stump in both innings of the Centurion Test. The same pattern has been visible in the Indian captain’s batting for a few months now.

Speaking after the end of the fourth day’s play against South Africa in Centurion, Rathour stated that he will not encourage Kohli to stop playing those drives outside off stump. The Team India coach explained at a press conference, "These are shots which brings him (Kohli) lots of runs and it's his scoring shot. He needs to play that shot and I think it is always your strength that turns out to be your weakness as well.” 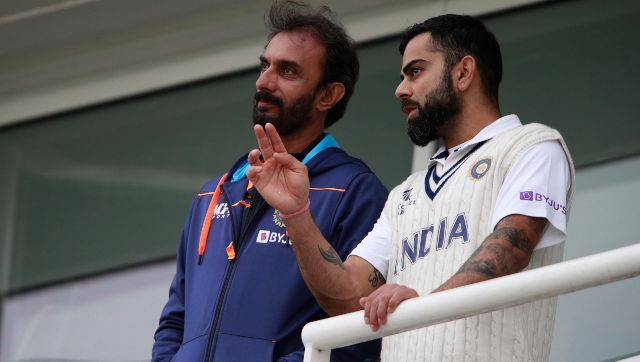 Rathour pointed out that batters will never score runs if they don’t play shots. So it’s all about finding the balance between choosing the right ball to play and leaving the dangerous ones. He added, “You will never score runs as well. Now, when to play that shot, that's the part there are constant discussions. Was it right all and right stage to play that shot? If we can tighten up our game-plans a little more, that will be better. So that's the shot he (Kohli) plays well and he needs to carry on playing that shot but he needs to pick better balls.”

Rathour also backed Cheteshwar Pujara and Ajinkya Rahane to get back among the big runs soon. While Rahane looked good in Centurion, he only managed scores of 48 and 20. Pujara was dismissed for a duck and 16. Speaking out in defence of the duo, the batting coach said, "As far as Pujara and Rahane are concerned, they are trying their best, they are giving their best. Rahane was in really good touch but unfortunately, he got out, so has Pujara.”

"Pujara in past has played some important innings for us, you see these are challenging conditions, not many people have scored runs here. We need to be patient as long as they are trying their best, giving their best as coaching unit we are fine. Are we getting impatient? Not at this stage, I think," he added.