IPL 2020 final auction list out, 332 players to go under the hammer

The Board of Control for Cricket in India (BCCI), on Friday, released the list of players who will go under the hammer during the Indian Premier League (IPL) 2020

The Board of Control for Cricket in India (BCCI), on Friday, released the list of players who will go under the hammer during the Indian Premier League (IPL) 2020 auction in Kolkata on December 19. While 997 players had initially registered for the auction, the final list was reduced to 332 after all the eight franchises submitted their shortlist of players.

The highest base price is Rs 2 crore, and seven foreign players have listed themselves in this bracket. Of the seven names five are Australian -- Pat Cummins, Josh Hazlewood, Chris Lynn, Mitchell Marsh, and Glenn Maxwell. South African legend Dale Steyn and Sri Lankan all-rounder Angelo Mathews are the two others in the highest reserve price bracket.

Among Indians, Robin Uthappa is the only player to have placed himself in the base price list of Rs 1.5 crore. Further, veteran Indian IPL players like Piyush Chawla, Yusuf Pathan and Jaydev Unadkat will enter the auction pool with a base price of Rs 1 crore. Australia’s limited overs captain Aaron Finch has also placed his name in the Rs 1 crore bracket. 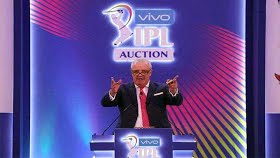 Of the capped players in the Rs 2 crore category, all seven are overseas cricketers. The Rs 1.5 crore bracket has one Indian and nine overseas players. There are 23 players in the Rs 1 crore bracket -- three Indians and 20 overseas. The Rs 75 lakh category has all 16 overseas players. As for the Rs 50 lakh bracket, there are a total of 78 players -- nine Indian, and 69 overseas.

Of the 332 players shortlisted for the auction, 186 are Indians, 143 are overseas players and a further three are from Associate Nations.

Earlier, Australia’s experienced left-arm pacer Mitchell Starc and England’s Test skipper Joe Root opted out of the IPL 2020 player auction. Starc will be missing the T20 tournament for the second consecutive year. He was chosen at the 2018 IPL auction by Kolkata Knight Riders for Rs 9.4 crore, but was unavailable for the entire tournament due to injury.

In 2019 too, he pulled out of the auction as he was nursing an injury, and did not want to jeopardise his World Cup hopes. The move worked wonders as Starc ended up as the leading wicket-taker in the World Cup with 27 scalps.