Australia and Bangladesh will face each other in what will be a crucial match for both sides at the Chinnaswamy Stadium in Bangalore on Monday.

Australia and Bangladesh will face each other in what will be a crucial match for both sides at the Chinnaswamy Stadium in Bangalore on Monday. The teams head into the clash having lost their respective opening matches. Bangladesh were given an absolute thrashing by an inspired Pakistan outfit, while Australia's batting had a meltdown against old foes New Zealand, under pressure. With New Zealand having registered two wins in two, and India, Pakistan also on the board, the race for the semi-final spot has got tougher. A second loss in a row will make it extremely difficult for the defeated side to progress. 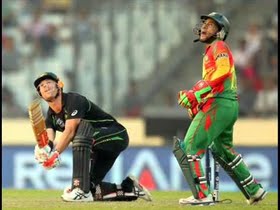 Australia's game was just not in sync against New Zealand. Some of the tactics used were absolutely baffling. They picked both their full-time spinners for the big match, but ended up giving them just an over each. While it is understandable that Ashton Agar went for 18 in his first over, skipper Steven Smith ought to have shown better confidence in him. Incredibly, Adam Zampa bowled an excellent over and conceded just three, yet he was not brought back into the attack. This in spite of the fact that the less accomplished Glenn Maxwell finished with impressive figures of 2 for 18 from three. Smith definitely needs to brush up his tactical skills.

Australia will also need to pull up their socks when it comes to their batting. Against the Kiwis, Usman Khawaja was the only one who looked in fluent form out in the middle. The others must also make an impression, being seniors. This list includes David Warner, skipper Steven Smith and Shane Watson. Australia also need to figure out with whom they want to open the innings among Warner, Khawaja and Watson. In the lower order, Mitchell Marsh was fluent, but was left with too much to do. Australia made perplexing moves with the bat as well, sending Agar ahead of proven finisher James Faulkner.

Bangladesh will be under greater pressure going into the series, since they failed to overcome Pakistan. Mashrafe Mortaza's team have had a good run against their big brothers in recent times, but Pakistan definitely proved a point when the teams crossed path in the World T20 game. Bangladesh will now have to come up with their best game, perhaps better than that, to overcome Australia, and stay alive in the event. Bangladesh's bowling was completely torn apart by the Pakistan top and middle order, and Australia will definitely look to build further pressure on them. The off-field woes with Taskin Ahmed and Arafat Sunny being banned from bowling won't help.

Bangladesh's batting completely crumbled under pressure against Pakistan. They have been heavily dependent on Tamim Iqbal in recent times. And, his early dismissal was clearly a big setback for the team. Tamim will again be the key with the bat as Bangladesh step out to face the Aussies. Having said that, there are a few other players eminently capable of being match winners. They include Soumya Sarkar and Sabbir Rahman. Lower down the order runs will also be expected from Mushfiqur Rahim and Mahmudullah. Shakib Al Hasan has got runs as well as wickets in the event. So, that augurs well for the team. But, they will need to come up with a complete all-round effort to outdo the Aussies.