When a team has to score close to nine runs an over chasing in a semi-final, the opposition is always considered the favourites to win.

When a team has to score close to nine runs an over chasing in a semi-final, the opposition is always considered the favourites to win. Having conceded a bit too many with the ball in the last few overs, India went into bat having given South Africa a lot of confidence, and the momentum as well. But, India themselves proved that their self-belief and assurance in this tournament, aided by the suitable conditions in Bangladesh, is on an all-time high. In the end, it must be said that they planned and executed the chase in a meticulous manner. 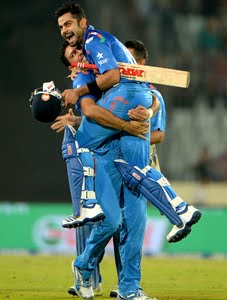 Chasing a big score, India needed to get off to a rollicking start, and this is where Rohit Sharma was so brilliant. Although he faced only 13 balls, five of those were dispatched to the boundary, which gave India the desired momentum on the big day. India would ideally have liked him to carry on, but he had done a great job, ensuring that the run rate did not blow out of proportions early on. India seemed to have leant a lesson from West Indies’ debacle, whose openers adopted a wait and watch policy against Sri Lanka, and had to pay the price for it.

India took a risk of sorts by continuing with Ajinkya Rahane ahead of Shikhar Dhawan. Of course, the decision was made easier considering the left-hander’s poor form, but on the big day, India needed someone who could withstand the pressure. Rahane did that exceedingly well. After Sharma departed following his brief blitz, the team needed someone who could hold the innings together and, at the same time, not allow the run rate to escalate beyond proportions. Rahane was equal to the task, and kept India in the game with a solid knock.

Above all, the chase was about another fantastic batting performance by Virat Kohli. The consistency of India’s number three bat never ceases to amaze, and when India chase he raises his game to an altogether different level. Things were no different on Friday at Dhaka. India had gotten off to a swift start, but the job was far from done and, for the umpteenth time, Kohli held the innings together. It was another mature innings, reminiscent of his growing stature, whereby he did not play one rash stroke, and yet found the boundary at ease to lead India into the final on an unbeaten note.

While Kohli was the undoubted star of the semi-final for India, a couple of other performances also deserve a mention. The run rate was still very high when Suresh Raina came into bat, but he played a major role in India getting home without trouble, by taking Wayne Parnell to the cleaners, and giving India that one big over, which completely turned the game in their favour. Earlier with the ball, Ravichandran Ashwin single- handedly ensured that South Africa were kept to a competitive total rather than a match-winning one. The Proetas still held the upper hand, until Virat Kohli sent them packing.