Delhi Capitals will take on Kolkata Knight Riders in the second game of the double header on Saturday at the Sharjah Cricket Stadium. Delhi have won two of their three contests, but go into today’s match having been stunned by an efficient Sunrisers Hyderabad in their previous encounter. KKR, on the other hand, also have two wins and one defeat to their name. In their most recent outing though they defeated the dangerous Rajasthan Royals by 37 runs. With the teams strong in both batting and bowling, a close contest could be in the offing.

While Delhi have made an impressive start to IPL 2020, their inconsistent batting remains a cause of worry. Prithvi Shaw and Marcus Stoinis have registered half-centuries in the Delhi’s two wins. However, the rest of members in the department need to fire. Shikhar Dhawan, in particular, needs a big score. He has been slow off the blocks, and has spent some time in the middle, but hasn’t been able to convert them into substantial knocks. Skipper Shreyas Iyer, Rishabh Pant and Shimron Hetymer are all match-winners, but need to get into the groove. 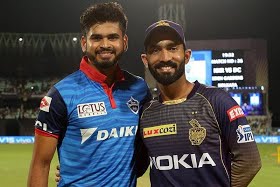 In the bowling department, they have been led brilliantly by who else but Kagiso Rabada. The South African pacer has delivered every time his skipper has asked him to. Anrich Nortje has bowled with good pace, but has also gone for a few runs. The spinners have excelled for Delhi, with Amit Mishra, in particular, standing out. It remains to be seen how DC fit in Ravichandran Ashwin back into the playing eleven.

If you look at KKR, they will be pleased with the form of opener Shubman Gill, who has notched up scores of 70 not out and 47 in the last two matches. Eoin Morgan too has found his strides with a few big hits at the end of the innings. They would like Andre Russell to make a bigger impact though. The extended experiment with Sunil Narine at the top of the order should be discarded for good. The poor run of skipper Dinesh Karthik should also concern KKR.

In the bowling, Kolkata have been well served by speedster Pat Cummins. But, it were the youngsters Kamlesh Nagarkoti and Shivam Mavi who stood up for the team in the win against RR. Mystery spinner Varun Chakravarthy has also made a distinct impact.

Head-to-Head Record: The two teams have taken on each other 23 times, with KKR winning 13 and Delhi 10.

With shorter boundaries as compared to the other two venues, Sharjah has witnessed some high scored. Batting is also easier with the ball coming onto the bat.

The temperature will be in the region of 28 to 35 degree Celsius. It will be warm in the evening, but should settle down as the game progresses.