Pakistan's unpredictably stands in the way of Aussie dominance

CWC 2015 AUS vs PAK Quater-Final: Whenever Australia and Pakistan have clashed, the level of excitement has always been heightened.

Whenever Australia and Pakistan have clashed, the level of excitement has always been heightened. This is because while Australia are always expected to do well, one doesn't quite know which Pakistan will turn up. It has been the cash with Pakistan cricket for a few decades now. Players and captains have come and gone, but Pakistan's unpredictably has remained constant. In the 1999 World Cup, they shocked Australia in the group stage, but came a cropper in the final at Lord's. In the current edition as well, they have come up with mixed performances, losing to India and West Indies before upsetting the mighty South Africans. 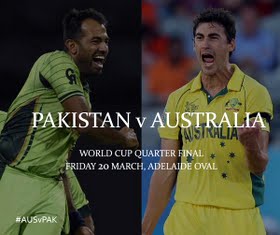 Owing to their consistency and the fact that they are playing at home, Australia would undoubtedly begin as favourites. But, Pakistan have a bowling line-up that can seriously trouble them. The only time their batting line-up came under fire was when they lost to New Zealand. Trent Boult troubled Australia in a big way, and Pakistan have similar bowlers in Wahab Riaz, Sohail Khan and Rahat Ali. Even Ehsan Adil made an impression in the previous match against Ireland. But, the loss of Mohammad Irfan is clearly a massive blow to Pakistan. His performance against South Africa was indication enough of what he is capable of.

Pakistan must ensure that they stay on the top of their game, for it is the only way they can compete against the mighty Aussies. As mentioned above, their bowlers will have a big role to play. While the pacers have done exceedingly well in the last couple of games, Shahid Afridi has been a disappointment with the ball. Since he is not contributing with the bat as well, it is imperative that he makes an impact with the ball. Pakistan's batting will also be tested. Sarfraz Ahmed has been crucial in turning around Pakistan's fortunes, and Ahmed Shehzad has also found form. But, the openers along with the likes of Haris Sohail and Sohaib Maqsood will be tested against Australia, for batting is definitely their weak link.

For Australia, they just need to do what they have been doing so well, performing upto potential. Both their batting and their bowling are in great shape. Aaron Finch and David Warner have got a hundred each, and though they have not been consistent, they have looked dangerous most times they have gone out to bat. The middle order, it is, that has really been so spectacularly good for the Aussies through the course of the tournament. Glenn Maxwell will be raring to go following that century against the Lankans while skipper Michael Clarke and Steven Smith too have got among the runs. The bonus for them has been the fact that Shane Watson is also back among the runs.

Like their batting, Australia's impressive bowling has also stood out. The experienced Mitchell Johnson was expected to lead the pack in the tournament, but while he has been good, it has been the other Mitchell, Starc, who has really stood out. James Faulkner as well has delivered whenever he has been fit. The experiment with Xavier Doherty against Sri Lanka was a failure, and the idea is something they must put on the backburner. Australia should fancy their chances against an unpredictable Pakistan, but, as mentioned earlier, you can never take them lightly.