In a pulsating match at the Kia Oval on Friday, New Zealand came up with a grand batting performance to post 398 for 5 on the board. However, England were marching towards the target with full furry, even a rain-interruption not stopping them

In a pulsating match at the Kia Oval on Friday, New Zealand came up with a grand batting performance to post 398 for 5 on the board. However, England were marching towards the target with full furry, even a rain-interruption not stopping them. England needed 24 from the final seven balls, and Adil Rashid smashed one towards the long-on boundary. The ball appeared to be heading over the ropes. Somehow, Tim Southee got two hands to it, but he knew that his momentum will take him over the ropes. Showing presence of mind, he threw the ball back towards Trent Boult, who was coming in from long-off. The catch was completed and the mach was New Zealand’s.

Earlier, New Zealand’s batsmen ensured that their bowlers had more than enough runs on the board to push for a series-levelling win. Ross Taylor has looked good in recent games, 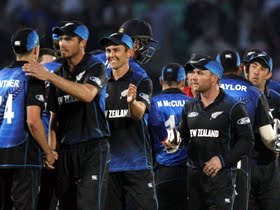 but it has been a while since he got a hundred. That finally happened at the Oval as the experienced Kiwi cruised to his 13th ODI hundred. Taylor started slowly by maneuvering the ball around, but the last 70 of his runs came at a whirlwind pace. He smashed three sixes in 10 balls, slog-sweeping Rashid, cutting Ben Stokes and then thrashing Chris Jordan over midwicket.

England had their chances against Taylor as he was dropped twice. On 7, Jason Ray spilled a catch at point and, on 40, Joe Root put him down at cover. Both were hit hard though. There was no stopping Taylor after that. Earlier, Brendon McCullum again got them off to a fiery start. He smashed five fours and two sixes in his 39 before Liam Plunkett sent him back. Martin Guptill made a patient half-century before a big partnership between Kane Williamson (93) and Taylor put the Kiwis in a commanding position.

England’s bowling figures were one that the players would like to easily forget. Chris Jordan conceded 97 in his 9 while Plunkett, Rashid and Stokes all went for over 7 an over, and Steven Finn just under. England could not exercise any sort of control on the Kiwi batsmen even after the Taylor-Williamson partnership was broken. Grant Elliot and Luke Ronchi both blasted 30s at a strike rate of 200, and even Michael Santner hit a couple of crucial boundaries.

In response, England got off to a ripping start. Ray and Alex Hales added 85 in under 13 overs, with the latter going on to make his first ODI half-century. Skipper Eoin Morgan blasted 88 from 47 balls with six fours and as many sixes. England remained in contention right through the chase, but New Zealand’s bowlers kept striking every time a partnership was building. Stokes (28) and Jos Buttler (41) fell when England needed them to stay on. Rashid (34) and Plunkett (44) featured in a rollicking stand, but the Southee-Boult partnership made the final difference, this time with their smart fielding.