Sri Lanka faced a dramatic batting collapse to get bowled out for a modest 238 in their crucial match against hosts Australia at Melbourne. Daniel Christian claimed a hat-trick and went onto take five wickets doing most of the damage to the Sri Lankans in the slog overs. James Pattinson in his comeback game for Australia did a great job taking four wickets.

It was a poor start for the Lankans losing both Skipper Mahela Jayawardene and Tillakaratne Dilshan inside five overs. Jayawardene (5) was run out by a direct throw at the bowling end in the 2nd over when he was called to steal a single from David Hussey at slip. Dilshan (9) was done in for sheer pace and bounce from James Pattinson which had him caught behind in the 5th over.

Sri Lanka was in an early soup at 17 for 2 when Dinesh Chandimal joined Kumar Sangakkara. Surprisingly, Australia let them off the hook and quite literally had allowed a partnership to grow. Sri Lanka was in control with both Chandimal and Sangakkara striking half centuries. Finally in the 29th over, Pattinson brought back into the bowling attack broke the partnership when he had Sangakkara (64 from 93 balls with 3 fours) top edging a hook shot to deep backward squareleg. Sri Lanka with that 123-run stand got to a solid 140 for 3 before Chandimal and Thirimanne seemed to be putting on another fine partnership. 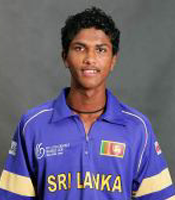 Against the run of play though, Dinesh Chandimal (75 from 84 balls with 3 fours and 2 sixes) attempted a wild slog off Pattinson to get caught at mid off. In no time, Sri Lanka received a massive blow as Angelo Mathews (5) departed early in the slog overs when he miscued a lofted shot off Christian which was nicely caught by a backward running Xavier Doherty at long on to leave the visitors at 195 for 5. In his next over, Christian bowling inswingers onto the stumps picked up a hat-trick out of nowhere!

It was in the 44th over that Christian claimed his hat-trick to reduce Sri Lanka from 206 for 5 to 206 for 8. His first victim was Thisara Perera (5) who whacked him miles in the air off the backfoot towards deep mid wicket where Michael Hussey took an overhead catch but realizing that the momentum was pushing him beyond the ropes, smartly lobbed the ball inside the playing area to catch it again. Christian then bowled full length inswingers to Sachithtra Senanayake and Nuwan Kulasekara to beat their respective flick shots and strike the pad for consecutive lbws. Christian was a touch lucky to get his hat-trick as the ball that he got Kulasekara out was slipping down leg according to the Hawk Eye.

Sri Lanka crippled by the loss of wickets in the final phase of their innings settled for 238. Left-handed Lahiru Thirimanne played a crucial hand in helping the Lankans get atleast that through his neat knock of 51 from 59 balls (with 2 fours). Christian with 5 for 31 in 9 overs and James Pattinson with 4 for 51 in 10 overs were the best bowlers for the hosts.

Toss and Teams : Sri Lanka have won the toss and elected to bat first in the last league match of the CB Series at Melbourne. Its a must win game for Sri Lanka to enter into the Finals ahead of India. Australia have rested their Skipper Michael Clarke who seems to be having back problems. So Shane Watson lead them for a second time.

The Lankans have made one change with off spinner Sachithra Senanayake replacing the injured Farveez Maharoof. Australia have made on change by resting Brett Lee and replacing him with young fast bowler James Pattinson.