Rajasthan Royals finally ended their losing streak as they came from behind to win a thriller against Sunrisers Hyderabad. 85 runs came off the last 49 balls as Riyan Parag’s 42*(26) and Rahul Tewatia’s 45*(28) sealed the deal for RR.

Warner chose to bat and came to open with Bairstow. They made an uncharacteristically slow start as Shreyas Gopal shared the new ball with Archer. Teenage pacer Kartik Tyagi was given the ball in the fifth over and he immediately struck gold as he got rid of Bairstow. Warner and Pandey then grinded it out and tried to get a boundary an over as SRH reached 63-1 at the 10 over mark.

Warner upped the ante with sixes against Tyagi and Gopal before Archer cleaned him up with a full length delivery. Pandey then took the role of the aggressor with a six and a four off Tewatia as Williamson settled in. After getting to a solid fifty, Pandey holed out to Tewatia at long on. Williamson and Parag managed to get a few boundaries as SRH reached a competitive 158-4 at the end of 20 overs. 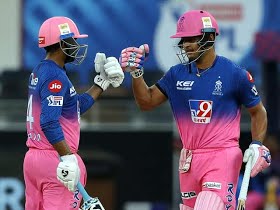 Rajasthan would have been reasonably happy with their efforts with the ball, and would have backed themselves to overcome their losing streak. They surprisingly sent comeback man Ben Stokes to open alongside Buttler. Stokes however, failed to impress as he chopped on against Khaleel in the second over of the innings. Skipper Steve Smith was found short of his crease as he was about to complete a second. Buttler, who punished Natarajan with a four and six, got an inside edge off Khaleel, as Rajasthan were reduced to 26-3.

RR were in desperate need of some stability, and the pair of Samson, Uthappa provided that. Samson hit consecutive boundaries against Abhishek Sharma as he looked to get back into rhythm. The magician Rashid Khan came back to dismiss both Uthappa and Samson as the match was all but over for Rajasthan with the required rate over 10 and only 5 wickets were left.

However, Tewatia and Parag combined to give some hopes of a turnaround with a few boundaries off Sandeep Sharma’s 18 run over. Rashid came to bowl the 18th with the required rate of exactly 12 runs per over. Most batsmen would have tried to play Rashid down, but Tewatia had other ideas. He took the attack to the star Afghani leggie and slammed three consecutive boundaries against him. He also smoked Natarajan for a four and a six in the penultimate over as the pressure had shifted to Hyderabad then. Parag then hit the winning runs with a six against Khaleel in the final over.