England might have won the opening Test at Nottingham but they would be looking to make a change in their bowling attack. Tall fast bowler Steven Finn didn’t live up to his expectations in the First Test and a poor spell from him nearly cost the Test match for England!

England might have won the opening Test at Nottingham but they would be looking to make a change in their bowling attack. Tall fast bowler Steven Finn didn’t live up to his expectations in the First Test and a poor spell from him nearly cost the Test match for England!

Finn was totally under utilized by Alastair Cook. It was a slightly better show from the 24-year-old in the first innings as Cook had no choice but to give him the new ball in the absence of an injured Stuart Broad. In fact, it was Finn who brought England back in the game by taking the early wickets of Shane Watson and Ed Cowan. However, the fast bowler couldn’t maintain his consistency to end up with costly figures of 2 for 80 in 15 overs in a low-scoring match. 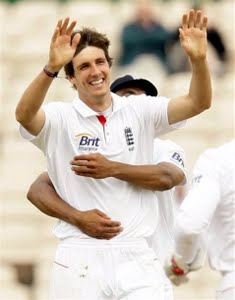 In the second innings of Australia, there came a stage when each and every run was so precious. Finn fielding at deep backward squareleg embarrassed himself completely losing sight of a slog sweep from Brad Haddin which he should have stopped. The crowd kept on booing him every time he fielded the ball after that ugly moment. With Anderson and Broad needing to rest, Cook finally brought in Finn who hadn’t bowled a single ball for 41 overs!

Australia needed 64 more runs to win with just the one wicket in hand when Cook trusted Finn to wrap up things with his pace and bounce. Things reversed completely for Finn and England though as the fast bowler went for 20 runs in a 2-over spell which was enough for Cook to quickly remove him out of the attack. Finn was taken to the cleaners by Haddin with the fast bowler producing innocuous length balls that lacked in any fizz off the track. Finn’s disastrous second spell brought Australia very close to victory and it was only because of a late outswinger from Anderson that got England through.

Finn recorded ineffective match figures of 2 for 117 in 25 overs which is certainly not what a team would expect from their third seamer. The tall fast bowler is likely to make way for either Tim Bresnan or Graham Onions. Bresnan is likely to have the edge as he has been England’s lucky charm although Onions has an equal chance of getting into the team for the Lord’s Test with his penetrative seam bowling. The Second Ashes Test at Lord’s begins on the 18th.