With the series already won, England would have expected to enjoy themselves by expressing themselves without a fear in the world in the fourth ODI at Headingley, Leeds. Instead, the found were at the receiving end of a hostile spell from comeback man Mohammad Irfan

With the series already won, England would have expected to enjoy themselves by expressing themselves without a fear in the world in the fourth ODI at Headingley, Leeds. Instead, the found were at the receiving end of a hostile spell from comeback man Mohammad Irfan. The tall left-arm quick displayed shades of his glorious past to pick up both the England openers. However, his fitness let him down as he limped off the field following an injury. His comeback lasted just one ball. And, the fact that England were chasing less than 250 enabled them to come back from 72 for 4 to go 4-0 up.

The biggest positive for England from the game was the fact that significant contributions came from members who hadn't done much in the previous encounters. Ben Stokes, who is just feeling his way back to bowling following his injury woes, starred with the bat, and took England out of trouble. He kept a cool head when the hosts were under pressure, and once he got his eye in, ensured Pakistan were the team feeling the heat. Jonny Bairstow, who was drafted in at the last minute, after Jos Buttler was declared unfit, also made a crucial contribution. In fact, it was Bairstow's 103-run stand with Stokes that gave England the upper hand.

In the bowling as well, the spinners picked up their game. Adil Rashid and Moeen Ali hadn't really made much of an impression in the first three matches. But, at Leeds, they were on top of their game. The leggie Rashid stood up with 3 for 47, claiming the three big wickets of Azhar Ali and Sarfraz Ahmed. Ali kept things quiet while also chipping in with a couple of wickets, including that of Babar Azam. In fact, it ended up being a memorable match for the all-rounder as he also contributed with the bat, remaining unbeaten on 45.

For Pakistan, it was the same old story with the bat. They were desperately seeking a good start. But, Sami Aslam and Sharjeel Khan both fell cheaply again, leaving Pakistan middle-order with a lot to do. Skipper Azhar Ali fought hard, but his 80 only ended up in Pakistan putting up a decent score and nowhere near a match-winning one. Lower down the order, Imad Wasim again displayed his skills with the bat, chipping in with a fighting fifty. But, the failures of Babar Azam, and Sarfraz Ahmed, in particular, hurt Pakistan. Mohammad Rizwan also did not contribute much. 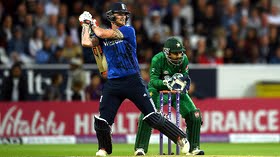 Pakistan stayed in the match for a while thanks to their bowling. Irfan, in particular, made life hell for the openers, as Alex Hales and Jason Roy found out how things can be at the top of the order. But, the problem for Pakistan was that the joy was short-lived. A man who hasn't played for a while is expected to be fit, instead five overs was all Irfan could deliver. Umar Gul kept things tight, but he was nowhere near threatening as before. Imad Wasim, Mohammad Nawaz and Nawaz Ali, all failed to make much of an impression as England sauntered home in the end. Like in the first three games, they were again too good for Pakistan.