The Black Caps crushed Zimbabwe by 202 runs in the third and final ODI at the McLean Park in Napier to cleansweep the 3-ODI National Bank Series 3-0. After putting up a massive 373 on the board, the Kiwis bundled out Zimbabwe for 171 in 44 overs. 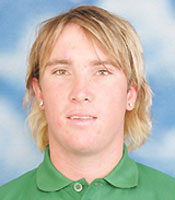 Zimbabwe never threatened to go for the run chase and were always the distant second in this match. As a consolation, Skipper Brendan Taylor helped himself to a well played knock of 65 from 62 balls (with 6 fours and 2 sixes). Apart from his knock, there is hardly anything to speak about the Zimbabwean innings. Leg Spinner Tarun Nethulla and off spinners Nathan McCullum and Kane Williamson picked up two wickets each. Debutant left-arm pacer Michael Bates bowled well for his 1 for 24 in 8 overs.

The Man of the Match was the New Zealand Skipper Brendon McCullum who scored 119 from just 88 balls.