ICC under the thumb of BCCI: Arjuna Ranatunga

In a scathing attack on the BCCI, former Sri Lanka captain Arjuna Ranatunga said the Indian Board's financial might has turned the ICC into a "toothless tiger" and called the IPL a "monster" that will destroyinternational cricket.

In a scathing attack on the BCCI, former Sri Lanka captain Arjuna Ranatunga said the Indian Board's financial might has turned the ICC into a "toothless tiger" and called the IPL a "monster" that will destroy cricket.

Ranatunga, who led Sri Lanka to the 1996 World Cup triumph, said the ICC has become a body which is constantly under the BCCI's pressure. 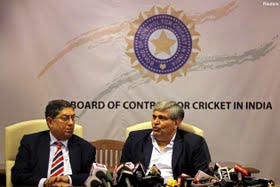 "The ICC's is to protect the game. They don't have to favour anyone. The game has been nurtured by honourable men of the ICC for decades, but at present, ICC looks to be under the thumb of ," Ranatunga told The Island.

"Not too long ago we had individuals like Malcolm Speed, Eshan Mani and Malcolm Grey who stood against India. But the current ICC is weak and they simply give in. The ICC is becoming a toothless tiger," he said.

Ranatunga praised former captain Tony Greig for stating that the ICC needs to shake off India's influence on it to make right decisions.

"Hats off to Tony. Everyone these days fear India and no one wants to antagonise the BCCI. Tony is spot on, except for the fact that he has stated Bangladesh and Zimbabwe Boards do whatever the Indians want. He should have added Sri Lanka Cricket too.

"SLC is like a puppet on a string. The job of the ICC is to protect the game rather than any individual country," Ranatunga said.

Ranatunga said he fears for the of Test cricket due to the IPL as players seem to be gravitating towards the league instead of the traditional format.

"I have seen this IPL and I must say from the first day I didn't like it. We have created a monster that will go on to destroy international cricket," Ranatunga said.

Ranatunga said calls for creating a window for IPL in the international calendar are "ridiculous".

"It's absolutely ridiculous. If we are going into that, what about if s also ask for windows. If you take football, international matches aren't the priority except for the World Cup, which comes once in four years. In football the glamour is in club tournaments.

"Are these people make cricket a club based sport too? I feel very sorry and sad at the state of affairs and I hope and pray sanity will prevail," Ranatunga said.

He blamed the absence of cricketers from the ICC's top decision-making body for the current scenario.

"One fault that I see with the ICC at the moment is that most of the Directors haven't played the game and the main decisions are taken at the Directors' meeting.

"If you take most of the CEOs of cricket boards, they are past cricketers, but when they come up with for the well-being of the game, the Directors need to support those decisions rather than rejecting them," he remarked.