‘No need to panic’: Despite Wellington reverse, Ravi Shastri confident of team fightback

Team India head coach Ravi Shastri played down all worries regarding the team following the defeat in the first Test against Wellington by 10 wickets, which was preceded by the 0-3 loss in the ODI series. According to Shastri, the ICC World Test Championship and T20 World Cup are the main focus of the team while the ODIs will not be given as much priority.

"I would not judge ODI and Test cricket. For us, the least priority is ODI cricket at the moment looking at the schedule and what is coming in the next two years. Number one priority is Test cricket and then comes the T20Is. So, if you look at that, we have had a great run in the Test arena," Shastri said while speaking to the media ahead of the 2nd Test in Christchurch. 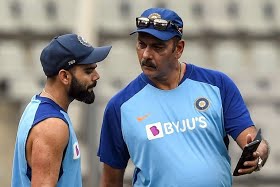 Earlier, after being whitewashed in the one-dayers, Indian skipper Virat Kohli too had stated that ODIs are not as relevant in this calendar year and that the team’s focus is on T20Is and the World Test Championship

"One loss does not mean that we need to panic. The boys are ready. They know what to expect and they are mentally tuned," the former all-rounder added.

"You generally do that when you see something which is not right and then you have a solution for it. I am not one of those coaches you will ask to do something without having an answer. When you are on the road, things can change," Shastri went on to explain.

Following the defeat at Wellington, Kohli’s captaincy has come under scanner, as has now lost 9 out of 15 Tests in SENA (South Africa, England, New Zealand, and Australia) countries. With four wins, Kohli has a win percentage of 26.67 and a loss percentage of 60. Kohli’s personal form with the bat has also been worrisome as he has managed only one fifty on the entire tour.

New Zealand’s experienced left-arm seamer Trent Boult, however, backed the Indian team to fight back, stating that India is the number one team in the world for a reason. “They are number one in the world for a reason and that is because they can adapt to any conditions. We are definitely expecting them to adapt pretty quickly and be positive coming into this Test match. Their records speak for themselves,” Boult told reporters ahead of the Christchurch Test.

Boult, who picked up four wickets in India’s second innings at Wellington, is hoping for grass on the wicket at Christchurch. “From my point of view, hope there is grass on the wicket. There is always a good surface here. It also tends to turn. From my point of view, I like the cloud cover that exists here. Coming back into Test cricket is always a challenge. It is the toughest format,” Boult added.