Is it time to start looking beyond Ishant Sharma?

Ishant Sharma may have been ruled out of the opening Test owing to viral fever, but one still needs to ask the question whether the lanky medium pacer deserves a spot in the Indian Test squad any longer.

Ishant Sharma may have been ruled out of the opening Test owing to viral fever, but one still needs to ask the question whether the lanky medium pacer deserves a spot in the Indian Test squad any longer. When he stormed on to the scene by giving Ricky Ponting a torrid time in Australia, Sharma was seen as the next big thing in Indian cricket. However, like Irfan Pathan before him, Sharma has failed to build on a dazzling start and, of late, has been more of a liability in the side, unable of picking wickets and also suffering from fitness issues continuously. Here’s a comparative analysis of Sharma with some other prominent pacers to have played for India in recent years. 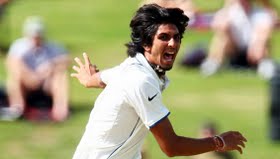 Ishant Sharma: Since making his debut in 2007, Sharma has represented India in 45 Tests but has managed 133 wickets at a disappointing average of 37.87. Sharma’s strike rate of 66.4 is even more discouraging. Also, Sharma has managed only three five-wicket hauls in a total of 78 innings. His figures definitely need to improve significantly if he hopes to take over as the team’s spearhead from Zaheer Khan in the near future.

Zaheer Khan: The left-arm pacer has set the modern benchmark for others to follow. In 85 Tests, he has scalped 291 wickets at an average of 32.06. The average may seem slightly on the higher side, but considering that he has almost singlehandedly shouldered the burden of India’s pace bowling for the last decade, it is more than acceptable. Khan’s figures include 10 five-wicket hauls and a strike rate of 58.6. Sharma needs to get closer to Khan in all aspects if he aims to taste success in Tests.

Irfan Pathan: Going solely by statistics, Pathan has a much better record than Sharma. In 29 Tests between 2003 and 2008, he picked up exactly 100 wickets, averaging 32.26. In stark contrast to Sharma who has managed only three five-wicket hauls in 45 Tests, Pathan has seven in 29. His strike rate of 58.8 is also significantly better. However, in spite of the impressive stats, everyone is aware that Pathan is not the same bowler in the longer version he once used to be. Of late, even Sharma seems to be heading the Pathan way. He has lot the nip in his bowling, which troubled Ponting.

S. Sreesanth: The erratic pacer from Kerala, Sreesanth has figures similar to Sharma. He has featured in 27 Tests so far and has claimed 87 wickets at an average of 37.59. His strike rate is also near to that of Sharma –62.2, and, coincidentally, even he has grabbed three five-wicket hauls. If Sreesanth finds himself out of the side, there is no reason why a man with similar figures must retain his place.

Ajit Agarkar: Of the recent pace bowlers to have played for India, only Agarkar possesses a worse record that Sharma. The Mumbai captain represented India in 26 Tests, but managed only 58 wickets at a horrendous average of 47.32 with a solitary five-wicket haul. Agarkar’s strike rate is also an unprecedented 83.7 for a front line pace bowler.