India vs Australia: Coach Kumble all praise for workhorse Yadav

Umesh Yadav's Test numbers may not be flattering, but India's head coach Anil Kumble has nothing but admiration for the fast bowler from Vidarbha. According to Kumble, Yadav always looks to pick-up a five

Umesh Yadav's Test numbers may not be flattering, but India's head coach Anil Kumble has nothing but admiration for the fast bowler from Vidarbha. According to Kumble, Yadav always looks to pick-up a five-for whenever he comes to bowl.

Umesh has picked up key wickets for India in both the Tests against the Aussies so far, and Kumble is extremely by what Yadav has managed to do. "We have seen what is Umesh is capable of. Although, he doesn't have the kind of wickets that you would expect in a home season as he has played literally all the Test matches. But the way he has bowled, the way he has given us the breakthroughs, he may not have a five-wicket haul but every time he has bowled, he has looked like he will pick up a fifer," Kumble said while speaking to the press at Ranchi. 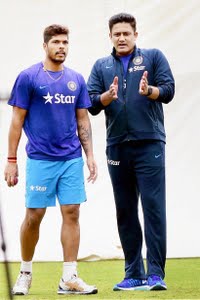 "That's the kind of maturity and the kind of improvement that he has shown. It's credit to him whichever spell he comes to bowl, he has contributed by picking up those breakthroughs," he was further quoted as saying in a report by ANI.

Kumble also insisted that the DRS controversy of Bengaluru Test is behind them, and they are solely focused on the Ranchi Test. "We've moved on from whatever happened in Bengaluru. The focus has to be on the game and I thought we really made a fantastic comeback after losing the first Test'The focus is back on the game," he added.

The former leggie, who finished his career with 619 Test scalps, also had good things to say about the current spin duo of Ravichandran Ashwin and Ravindra Jadeja. "Ashwin will always be spoken about but I am glad that Jadeja has come up and done what he is capable off. I am really glad that both of them are currently at the top of the ICC Rankings."

On playing 17 Test matches at a stretch owing to the long season, Kumble stressed that the boys have responded really well. "It's been a long season. It's not easy when you are playing 17 Test matches on the trot, especially for the bowling unit and of course for the batsmen as its takes it own. Touchwood we have had very little injuries. Of course Shami is injured and he is also coming back. So, we have had some injuries but some of them have responded really well to the challenges that have come about.

"Every individual has stood up with the captain leading from the front. It's really nice and augurs well that each individual has contributed to the success of the team and we would like to finish the last two Tests in a very good way and I am sure, it will be something we all would be cherishing in the end of the series," Kumble commented.