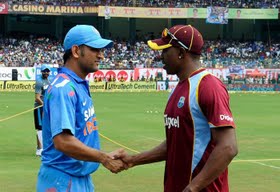 The cling film will come off in Dharamsala, where West Indies will need to prove themselves all over again. Following an encouraging performance in Kochi, where they made 321 in a massive win, familiar failings returned to haunt them in Delhi, where they gave up their last eight wickets for 45 runs and lost a match they had been in control of.India haven't been at their best in this series either, and it will worry them a little that their batting is yet to click into gear. And not just during this series. India had a collective batting average of over 35 in both 2012 and 2013, but this year they have averaged 31.15 - they haven't done as badly since 2006. Having scored a century every 2.4 matches over the last two years, they have only made four centuries in 18 matches this year.

1.If he bats, Virat Kohli will play his 50th ODI innings at home. If he scores 7 or more, he will become the second batsman after Michael Bevan to have 50-plus averages after 50-plus innings, both home and away.
2.Dwayne Bravo is on the cusp of two milestones: he is 32 runs and a wicket away from becoming the ninth player to complete the ODI double of 3000 runs and 200 wickets.
3.MS Dhoni is set to play his 250th ODI, becoming the eighth Indian player to do so. His 249 matches include three for Asia XI.
4.Ajinkya Rahane needs to score 18 to reach 1000 ODI runs.