Hosts South Africa have gone 2-0 up after working hard for a 5-wicket victory over Sri Lanka in the 2nd ODI at East London. South Africa took 48.4 overs to finally get to the target of 237.

The run chase for the Proteas was based on half centuries from Hashim Amla and JP Duminy. Hashim Amla provided the platform early in the innings with his 55 from 58 balls with 5 fours and 2 sixes before he was bowled through the gate by Dhammika Prasad. JP Duminy batted through to see South Africa home with an unbeaten 66 from 87 balls with a six and also to get the Man of the Match award. For the Lankans, pacer Dhammika Prasad claimed 3 for 44 while Lasith Malinga bowled well for his 1 for 38. 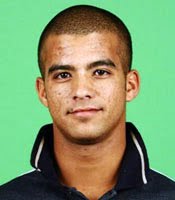 Update : South Africa are 86 for 1 in 18 overs chasing a modest target of 237 in the Second ODI. Former Skipper Graeme Smith has been dismissed after a slow 28 from 56 balls by Dhammika Prasad. Hashim Amla is batting nicely on 49* with 4 fours and 2 sixes alongside Jacques Kallis who is on 8*.

Sri Lanka Innings :Sri Lanka after their humiliating 43 all out at Paarl have posted a healthy total of 236 for 6 in the Second Sunfoil ODI at the Buffalo Park in East London. Under overcast conditions, AB de Villiers won the toss and rightly put Sri Lanka to bat first. Not a single over was lost despite a drizzle which delayed the toss for this second ODI. The visitors found themselves in early trouble at 21 for 2 in 10 overs losing both their key batsmen – Skipper Tillakaratne Dilshan (run out for a duck) and Kumar Sangakkara cheaply.

A third wicket stand of 84 runs between opener Upul Tharanga (66 from 85 balls with 6 fours and a six) and Dinesh Chandimal provided some sorts of a platform for the Lankan innings. Chandimal went onto bat out through the rest of the innings scoring 92 not out in 115 balls with 6 fours. He got useful support from Nuwan Kulasekara (22 from 13 balls with 2 fours and 2 sixes) and Angelo Mathews (28 from 29 balls with a four and a six).

For the Proteas, Lonwabo Tsotsobe and Morne Morkel took two wickets each.