Having already made it to the playoffs on the back of a very good season this time, Delhi would be keen for yet another win so that they can finish in the top two in the points table

Having already made it to the playoffs on the back of a very good season this time, Delhi would be keen for yet another win so that they can finish in the top two in the points table, which will give them two shots at the final in the playoffs. Rajasthan, in contrast, will want to win the last game at Feroz Shah Kotla and hope they somehow make it to the fourth position

Delhi goes into the match having been completely outplayed by Chennai, as they were thrashed by 80 runs. In a major blow for Delhi, Kagiso Rabada has been ruled out of Indian T20 Cricket with a back problem. Rabada has been the standout performer for Delhi with the ball, so he will be sorely missed.

Rababa apart, Delhi's batting has been their strong point but for a couple of matches like the last one against Chennai. The likes of Shikhar Dhawan, Rishabh Pant, Prithvi Shaw as well as skipper Shreyas Iyer have constantly made an impact with the bat. They would want to continue the same as the playoff approaches. 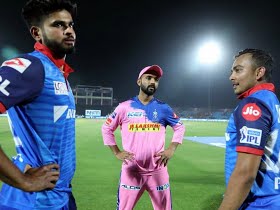 Rajasthan will also miss skipper and key batsman Steve Smith, as he has returned to Australia to join his team for the World Cup. This means there will be additional pressure on Ajinkya Rahane to deliver. Sanju Samson also will need to lift his game. After a stunning hundred earlier in the season, he hasn't quite been the same.

In the bowling, spinner Shreyas Gopal will again be the key. He has troubled and dismissed the likes of Virat Kohli and AB de Villiers among others in the tournament. Now, he would look to dish out the smart treatment to Dhawan, Pant, and co. Remember, last time the teams met, Dhawan and Shaw were outdone by Gopal. And, while Rahane slammed a brilliant ton, Pant blistering 78 made all the difference.