Ricky Ponting’s retirement has expectedly left a big hole in Australia’s batting line-up, that at the significant number three position. And one of the reasons for Australia’s failure in this Ashes has been the fact that he haven’t found a stable influence at the anchor position over the four Tests. 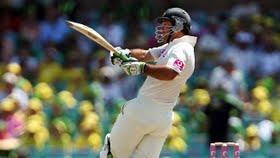 Ricky Ponting’s retirement has expectedly left a big hole in Australia’s batting line-up, that at the significant number three position. And one of the reasons for Australia’s failure in this Ashes has been the fact that he haven’t found a stable influence at the anchor position over the four Tests. Australia have tried various combinations at the slot over the course of their losses but their experiments have failed to bear fruit, as a result of which they haven’t been able to stabilise themselves in spite of getting some good starts from their openers.

Opener Ed Cowan was pushed to number three in the opening Test, but struggled, making a duck and 14. Usman Khawaja took over in the second Test, and his second-innings half-century meant he retained his place for the next Test. At Old Trafford though, the left-hander managed only 1 and 24. In the loss at Chester-le-Street as well, Khawaja was disappointing making a duck and 21. As the scores suggest, Khawaja has got a number of stars, but has failed to carry on, as a result of which his spot is in danger for The Oval Test. His failure in the practice game against England Lions won’t help his cause.

Here’s a look at some replacements Australia can try at number three in case they do not want to go with Khawaja.

Phillip Hughes: The left-hander is a natural opener, which means he has the experience of dealing with the new ball. Hughes was unlucky to find himself out of the team in spite of making a plucky 81 in the opening Test, sharing an enterprising partnership with Ashton Agar. The twin failures at Lord’s saw him being dumped for the next two Tests. Hughes deserves another shot in the series. He has a reasonable amount of experience as well, having featured in 26 Tests.

Steven Smith: He would be an off-beat choice, but Australia have to try and do something different to get things in order at the number three position. To be fair to Smith, he has been surprisingly restraint in his approach in this series, and has tasted more success than expected. He got a fluent half-century at Trent Bridge, and his 89 at Old Trafford, was a high quality knock; his partnership with Michael Clarke setting up the Test nicely for the Aussies.

Michael Clarke: There will be no harm in the Australian captain leading from the front. He has batted at number four and five over the four Tests, and coming in at number three shouldn’t be a tough choice for him especially since the team needs his services most in the absence of a good number three. Clarke, who has one big hundred and a fifty in the series, has the ability and the technique to survive and score big at the crucial number three slot. Whether he takes up the challenge is what remains to be seen.