Ajinkya Rahane registered his third one-day hundred, scoring 103 off 104 balls as India overcame West Indies by 105 runs at the Queen's Park Oval in Port of Spain, Trinidad on Sunday.

Rahane and Shikhar Dhawan (63) added 114 for the first wicket, and then a further 97 with skipper Virat Kohli. The Indian skipper smahsed 87 from 66 balls as India posted 310 for 5 in 43 overs as the match was shorted by rain.

West Indies were never in the hunt as they managed 205 for 6. Bhuvneshwar Kumar provided the early breakthrough as he sent back opener Kieran Powell, who chased one away from his body. Wickets kept falling and West Indies could only manage 31 runs in the first 10 overs. 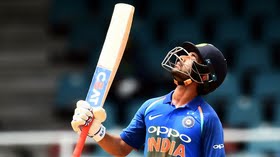 Chinaman bowler Kuldeep Yadav starred with 3 for 50 while Kumar took 2 for 9. For the hosts, Shai Hope was the star with 81 while Roston Chase made an unbeaten 33.

It was another disappointing encounter for Yuvraj Singh though as he managed only 14. He nicked one behind the stumps, flashing at Jason Holder without moving his feet.