Wicket-keeper O'Brien, recently capped by Northamptonshire, suffered a hairline fracture of his left hand after being hit by Simon Jones of Hampshire during a match-winning innings of 121 in the Clydesdale Bank 40.

"It's obviously a big blow to lose Niall as he has been in such excellent touch this season," head coach Phil Simmons said.

"We're lucky in that we have Gary Wilson as a back-up keeper, and Andrew Poynter has never let us down any time he's been called upon." 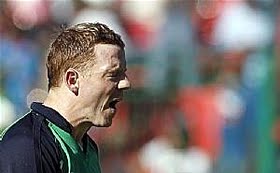 O'Brien added: "It's so disappointing to miss these games, as I've obviously good memories of playing Pakistan after winning the Man of the Match award when we beat them in the 2007 World Cup. I'll have another x-ray in 10 days and would hope to be back playing in about three weeks."

Both matches will be played in Stormont on 28th and 30th May.

Poynter, who is contracted to Middlesex, has played 14 One-Day Internationals between 2008 and 2010 and his introduction to the squad means that Surrey's Gary Wilson will take over the wicket-keeping duties for the series.