SA vs AUS 1st T20 Preview: The ICC World T20 to be held in India is just days away. And, as a preparation for the same, Australia and South Africa will face off in a short three-match series to be played in South Africa.

The ICC World T20 to be held in India is just days away. And, as a preparation for the same, Australia and South Africa will face off in a short three-match series to be played in South Africa. The first of the matches will be held at Durban on Friday. The Proteas will be confident going into the series, as they are coming off a T20 and ODI series win against England at home. This was after they lost the Tests at home. Before that, they achieved similar results in India, winning the shorter formats before going down in the five-day games. The same cannot be said about Australia. They were thrashed 3-0 by the Indians at home, and the aftermath of the disaster has been the sacking of Aaron Finch as T20 leader. 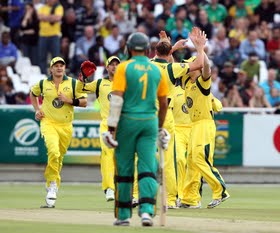 Australia would look to put behind the disappointments against India, and start afresh. With a new T20 captain in regular leader Steven Smith, they have reason to believe that this is actually a new beginning. Australia have a strong batting line-up, which will be keen to deliver against South Africa. David Warner and Finch are big hitters, who can be match-winners on their day. Further, in Usman Khawaja, they have a batsman in the form of his life. Shane Watson too has been reborn in international cricket while Mitchell Marsh is improving with every game. Glenn Maxwell will need some runs though to get his confidence back ahead of the World T20.

Australia are not strong in the bowling though, and this is one area where India exploited them during their previous visit. Mitchell Starc, the best bowler, remains unavailable, which means Josh Hazelwood will again have to play the lead role. John Hastings was impressive against India, and he has rightly been retained. In Watson, Marsh and Maxwell they possess three batting all-rounders who can chip in with the bat. But, it remains to be seen who among Adam Zampa and Ashton Agar is preferred as the main spinner, given South Africa's weakness against slow bowling. Andrew Tye has also been rightly kept in spite of his poor show against India in a crucial match.

South Africa will look to continue from where they left off against the Englishmen. AB de Villiers and Hashim Amla decapitated England's bowling in their own inimitable style. The Proteas would expect the fire and ice combination to keep rocking. So good have de Villiers and Amla been, Quinton de Kock is unable to find a place in the starting eleven, which augurs well for the team. Skipper Faf du Plessis has played himself into decent form after the horror in India. Chris Morris was the find of the series against India with some big-hitting, which means David Miller has to fight for his place. What they would like most though is runs for Rilee Rossouw and JP Duminy.

The big news for South Africa in the bowling department is that Dale Steyn is back. And while that augurs well for the Proteas, his fragile body remains a matter of concern for the team ahead of the World T20. In Steyn's absence, Kyle Abbott and Kagiso Rabada formed an effective combination, while David Wiese provided good back. The best takeaway for South Africa in the bowling department against England though was the return to form of leggie Imran Tahir. With the pacers in form, Tahir becomes doubly effective as a strike bowler. On paper, South Africa definitely hold the edge, but teams take Australia lightly at their own peril.