India got off to a perfect start in their World Cup 2019 campaign with a six-wicket triumph over South Africa at Southampton. Chasing 228 for victory, India found it tough earlier on, but a hard-fought hundred from Rohit Sharma, his 23rd, saw them through in the end.

Electing to bat first after winning the toss, South Africa managed to post only 227 on the board. Jasprit Bumrah"s brilliant opening spell sent the openers back in the hut cheaply after which Yuzvendra Chahal ran through the middle and lower order with 4 for 51.

Rohit had it tough surviving a few close calls but hung on to take India through. At the post-match presentation, he admitted it wasn't an easy wicket to bat on. “It was a different experience from playing in India. There was something in it for the bowlers throughout the game, so you had to play out the overs initially and see what the ball was doing. 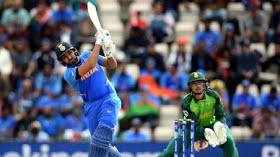 “I couldn’t play my natural game. I had to take my time. There are certain shots that I like playing, but I had to cut out those and play close to the body and try and leave as many balls as possible in the initial stage," admitted Rohit.

During the course of his innings, Rohit featured in two crucial partnerships, 85 with KL Rahul and 74 with MS Dhoni to lay the foundation for India's win.

“Building partnerships were key in this chase. It was a small total, but since there was something in the pitch for the bowlers, the going was a bit tough and we needed partnerships,” Rohit explained.