Sri Lanka eased to an 8-wicket victory in the Second Final of the CB Series at the Adelaide Oval as it chased down a target of 272 with 34 balls to spare! With this, the CB Series fate will be decided through the outcome of the third final which will be at the Adelaide Oval day after tomorrow. The stars of the Sri Lankan victory were its openers Jayawardene and Dilshan who put up a massive 179-run stand for the first wicket!

Needing a stiff target to win, the Sri Lankan openers – Skipper Mahela Jayawardene and Tillakaratne Dilshan yet again provided a flying start. This time the pair were determined to last long and make it easy for the rest of the batsmen to chase the high target. The openers put up 179 runs in 27.1 overs before Skipper Mahela Jayawardene played across the line on the backfoot to James Pattinson and got hit on the backpad plumb infront of off and middle for an lbw. Jayawardene scored a fluent 80 from 76 balls with 8 fours and a six.

Kumar Sangakkara who came in next batted fluently along with Dilshan to add up 55 runs for the 2nd wicket and leave Australia with no chances of getting back in the match. The 35-year-old Dilshan got out soon after reaching his 12th ODI hundred when a full blooded pull shot off Brett Lee flew straight into the hands of deep mid wicket. Dilshan finished with a score of 106 (from 119 balls with 10 fours) leaving the park with his team at a supreme position of 234 for 2 in the 39th over.

The match got wrapped up in 44.2 overs with Kumar Sangakkara helping himself to an unbeaten 51 (from 57 balls with 5 fours) and Dinesh Chandimal getting 17*. Dilshan who scored 106 and bowled well for his 10-1-40-1 was the obvious choice for the Man of the Match.

Australia have finished at a strong total of 271 for 6 in the second final of the CB Series on a slow and dry pitch at the Adelaide Oval. The hosts worked hard for their runs on the slowish pitch but a massive partnership between centurions David Warner and Michael Clarke took them to an above par total.

Mahela Jayawardene pulled out an ace when he opened his bowling with part-time spinner Tillakaratne Dilshan. The move paid off as Matthew Wade (14) fell in the 5th over getting bowled by Dilshan to a skidding delivery which defeated his pull shot. Australia slowly progressed after that through Warner and Watson until a run out pushed the hosts back to 56 for 2 in 15.1 overs. Shane Watson (15) was run out by a direct hit from the bowler Farveez Maharoof when he was asked to steal a single for Warner.

Sri Lanka was on top and Australia was very much on the backfoot when Skipper Michael Clarke joined David Warner. The two in-form batsmen kept Sri Lanka at bay right from the moment they got together and the visitors made matters worse by failing to take their half chances. Warner refreshingly batted with responsibility on a pitch that wasn’t too easy for batting. Both Clarke and Warner got to their respective centuries to set up Australia towards a high total. 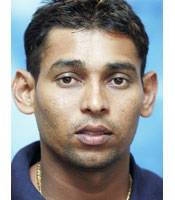 It was only in the 46th over that the 3rd wicket stand was broken having put up as many as 184 runs in a little over 30 overs. David Warner (100 from 140 balls with 4 fours and a six) was the man to depart just after scoring his 2nd ODI century which was also a back-to-back hundred. Warner got out slashing Malinga into the hands of Dilshan at deep covers.

Michael Clarke who scored a superb 117 from just 91 balls with 5 fours and 4 sixes got out at the end of the 49th over run out after trying to take a risky single from mid wicket. By then Clarke was having trouble with his back but before that he played some attacking shots to push the tempo. Lasith Malinga bowled well for the Lankans in the final overs by taking three wickets and going for just 40 runs in his 10 overs. Dilshan earlier had bowled well giving away only 40 in his 10 overs along with a wicket.

Toss and Teams : Michael Clarke has won the toss and Australia have elected to bat first yet again in the CB Series. The hosts are just one win away from clinching the Series, so it’s a must win situation for Sri Lanka in this second final at the Adelaide Oval.

Both the sides have made one change each to their playing XI. Australia have brought in Clint McKay for Ben Hilfenhaus. David Warner is going to play despite just recovering from a groin injury. Sri Lanka have gone in for the extra batsman in Chamara Kapugedera who comes in for fast bowler Dhammika Prasad.