Andrew Strauss will be taking a forced break from his role as director of cricket role with England to be with his wife during her cancer treatment. Strauss’ spouse was diagnosed with cancer in December. Andy Flower, the England and Wales Cricket Board’s director of elite coaching will step up to the role temporarily.

“Many people know my wife was diagnosed with cancer in December. Luckily, she’s been very well up until now. But she’s starting new treatment pretty soon which is going to be more demanding and more challenging for her. I need to spend a bit of time supporting her and the family through that time,” Strauss was quoted as saying in a Hindustan Times report.

“I’m stepping away from my day-to-day duties while that treatment goes on, and my boots will be very adequately filled by Andy Flower. We all know about his capabilities and his experience in and around English cricket. 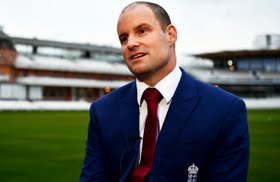 “He will man the fort while I’m away and there will be other responsibilities assigned to different people within the cricket department to make sure all these big-picture things we are working on are still moving forward while I’m away,” Strauss was further quoted as saying.

It will be pertinent to note that Andrew Strauss has been the director of cricket since May 2015.