In a somewhat surprising decision, the BCCI has extended the contract of current Indian coach DuncanFletcher, so as to maintain continuity in the team. While it is a fact that Fletcher may have come to know the Indian players, including the fringe ones, quite closely...

In a somewhat surprising decision, the BCCI has extended the contract of current Indian coach DuncanFletcher, so as to maintain continuity in the team. While it is a fact that Fletcher may have come to know the Indian players, including the fringe ones, quite closely, it is also true he hasn’t done much since taking over from Gary Kirsten, immediately after India’s 2011 World Cup triumph. His record has been rather lacklustre, and although it is often said that the coach is only as good as the team, Fletcher hasn’t really inspired any confidence among the Indian fans with his presence.

Fletcher’s poor numbers speak for himself. Before the Mohali Test, he has been the Indian coach in 22 Tests, out of which India have lost 10 and won only eight. This disastrous run includes 4-0 losses in Australia and England and the home series loss to the Englishmen. Their only away Test win during this period had come in West Indies, and that too was two years back. They have fared only slightly better in the one-dayers, having won 25 games and lost 16. Even in the shorter format, they performed poorly in the World T20 in Sri Lanka, were disappointing in the tri-series Down Under, and failed to do well in the Asia Cup as well. 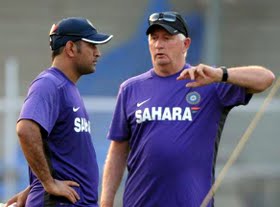 The big problem with Fletcher as India’s coach has been that he hasn’t really made his authority felt. When India were losing disastrously in England and Australia, he never bothered to speak to the press and explain the reason behind why India were performing so poorly. The worrying aspect is that India played through the phase with the same set of players, who did so well under Kirsten. The sudden drop in the winning run was thus even more alarming, and once it started there seemed to a never-ending tag to the same.

Losses in Australia and England saw the exits of Rahul Dravid and VVS Laxman, which means India have to rebuild all over again. Here is where India need Fletcher more than ever. But, the issue is that we don’t really know what is going on in Indian cricket with Fletcher in charge as the coach. Though Greg Chappell’s era was a disastrous phase in Indian cricket, he at least made it clear what he expected of the players. This is definitely not the case with Fletcher, the former Zimbabwean, who coached England. He must take a leaf out of Kirsten’s book, who constantly kept the media as well as the Indian fans in the loop.

Fletcher’s extension is a double-edged sword for India. If India do not perform well under him in the next year, which could be the case, since they would be having the tough tour South Africa, retaining him would be an issue. At the same time, relieving him would mean that India will have to look for a new coach in 2014, but that would be just a year ahead of the 2015 World Cup, which also wouldn’t be the ideal scenario. In either case, BCCI would be in a tight spot.