Angry at the criticism of Mahendra Singh Dhoni, India skipper Virat Kohli has said that he is being targeted unfairly.

Angry at the criticism of Mahendra Singh Dhoni, India skipper Virat Kohli has said that he is being targeted unfairly.

Dhoni hit 49 from 37 balls in the second T20 International in Rajkot, but played a lot of dots for which he was criticised.

"I don't understand why people are pointing him out. If I fail as a batsman three times, no one is going to point fingers at me because I am not over 35," Kohli said in Thiruvananthapuram after India's six-run victory 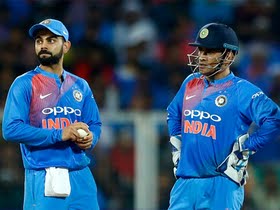 "The guy is fit, he is passing all the tests. He is contributing to the team in every tactical way on the field. With the bat, he did really well against Sri Lanka and Australia," the skipper added.

Defending Dhoni, he further said, "In this series, he didn't get much time to bat. You have to understand that the position he comes in to bat, even Hardik Pandya could not score in that game so why are we pointing out one man? Hardik as well got out in the last T20 in Rajkot. You are conveniently targeting one man, which is not fair."