It was known in the preview to the match that Australia had to beat West Indies in the game on Tuesday to enter the final. These are pressure situations in which the Australians mostly thrive

It was known in the preview to the match that Australia had to beat West Indies in the game on Tuesday to enter the final. These are pressure situations in which the Australians mostly thrive. And, things were no different in the eighth match of the tri-series as the visitors overcame the hosts with a fair amount of ease in the end. Australia's bowlers were thrashed in the last few overs while bowling first, and their fielding too remained below par. But, the Australian batsmen, and the middle order in particular, stood up to the task and ensured Australia would be the first team in the final, meeting the winner of the West Indies-South Africa clash.

More than the victory, it will be the men who contributed with the bat that will please the Aussies. Having got off to an ungainly start, Australia were under pressure. But, cometh the man, cometh the hour. The Aussie captain Steven Smith kept his calm and, in the company of George Bailey, began rebuilding the innings. However, just as Australia were gaining the ascendancy again, Bailey fell. His dismissal brought the match back on an even keel. This is from where Australia inched ahead though. Smith carried on the good work in the company of Mitchell Marsh, after which, Glenn Maxwell came in and put the finishing touches.

While Smith's effort was highly impressive, it were the performances of Marsh and Maxwell that would please the team most. Both have been rather disappointing in recent times, and Australia were waiting for this sort of an effort from the duo. Marsh showed a mature head, keeping the run rate under control, running hard between the wickets when the boundaries weren't coming. Australia will be expecting more such efforts from the all-rounder in the future. Maxwell went into the match under extreme pressure. But, he absorbed it well, and brought out his unique hits with conviction.

West Indies lost the match primarily because they could not put a 300 plus score on the board, in spite of the best efforts of Marlon Samuels and Denesh Ramdin. Both came up with brilliant batting efforts, but it was more a case of the Windies fighting back after a poor start. Samuels was brilliant once again, and but for his hundred, West Indies would not have got close to 250 as well. He did not have a great record against the Aussies going into the series, but that has changed, if only slightly. Ramdin also rose to the occasion well. The fact that West Indies fell short of a match winning total in spite of the duo's heroics proves how poor the earlier batsmen were. 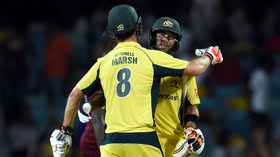 Australia just did not allow West Indies to get into any sort of momentum. The openers Andre Fletcher and Johnson Charles were sent back by the ever-impressive Mitchell Starc while the improving Josh Hazelwood got rid of Darren Bravo. Kieron Pollard gave the Windies the much-needed final flourish, but the West Indies were still short of 300. With the ball, Shannon Gabriel impressed early on, but the injury to skipper Jason Holder hurt the team. West Indies played two spinners in Sunil Narine and Suliemann Benn, but both were unconvincing. The hosts now need to beat South Africa to enter the final.