As it has been throughout the series, there was no shortage of drama on the opening day of the third Ashes Test at Old Trafford, Manchester. And, a lot of it had to do with those three capital words, DRS.

As it has been throughout the series, there was no shortage of drama on the opening day of the third Ashes Test at Old Trafford, Manchester. And, a lot of it had to do with those three capital words, DRS. A number of controversial decisions were delivered yet again, which affected both sides. However, at the end of the day, it was the sublime unbeaten century by Australian skipper Michael Clarke which stood out and kept his side alive in a series which seemed all dead and buried after the Lord’s disaster.

Clarke played a near perfect innings to take the Aussies to a comfortable 303 for 3 at the end of the opening day’s play at Manchester. Coming in with Australia stuttering somewhat at 82 for 2 following Usman Khawaja’s controversial decision, Clarke played the perfect captain’s knock, carving the ball to all parts of the ground en route to his unbeaten 125. The Aussie skipper hit as many as 17 fours during his stay at the crease to frustrate the England bowlers, who could not find a way past him on a pitch that did not have much assistance for them. 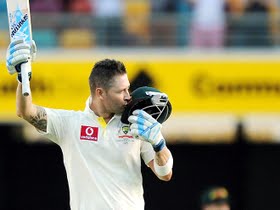 While Clarke was superlative on the day, an equally big contribution came from opener Chris Rogers. With so much negativity surrounding the team’s performance, Rogers blazed away to take the hosts by surprise. It was the kind of brutal knock one expects from Shane Watson. However, Rogers’ opening partner was not in a position to go for his strokes since he was battling his lbw woes. Rogers though was hell-bent on extending his Test career, and he did so by taking the attack into the opposition camp. Right from the start, Rogers was in combative mode, and he punished deliveries irrespective of the bowler.

Such was Rogers’ domination in the opening stand that by the time Watson was dismissed for a struggling 19, the partnership had reached 76. Watson edged a firm push to Alastair Cook off Tim Bresnan’s bowling to end an innings that lasted 82 minutes but did not inspire much confidence into the Australian camp. His dismissal was followed by arguably the biggest DRS disaster so far. Usman Khawaja was given out caught behind by Tony Hill off Graeme Swann. Khawaja promptly reviewed the decision, and third umpire Kumar Dharmasena upheld the on-field umpire’s call in spite of inconclusive evidence.

The Aussies were now in danger of squandering away a good start, and when Rogers lost his concentration in the post lunch session and was trapped lbw by Swann for 84, such thoughts would have crossed Australia’s mind. But, Clarke and Steven Smith featured in a partnership that made it Australia’s day. Unlike his captain, Smith wasn’t at his fluent best, but to his credit he hung on. He was lucky more than once. A close lbw appeal and a caught behind decision went in his favour and when he was trapped in front, England had no reviews left. Smith ended the day with 70 not out, and Australia on 303 for 3, representing the first hard day of toil for England’s bowlers in the series.