A resolute century by Pakistan skipper Misbah-ul-Haq, a determined half century from Asad Shafiq, and a haul of four wickets for England pace bowler Chris Woakes left the opening Test at Lord's on Thursday equally poised

A resolute century by Pakistan skipper Misbah-ul-Haq, a determined half century from Asad Shafiq, and a haul of four wickets for England pace bowler Chris Woakes left the opening Test at Lord's on Thursday equally poised. It was a cat and mouse contest throughout the day. After Pakistan began in determined fashion, England hit back with quick wickets, only for Pakistan to show that they were not going to be pushovers like Sri Lanka, courtesy Misbah and Shafiq. The century stand between the experienced Pakistan duo but the visitors ahead, but England ensured they had the final say on the day, claiming two wickets, including that of Shafiq as the shadows lengthened.

The day began with anticipation of how the cricket world would react as Mohammad Amir made his much-awaited return to Lord's, seeking redemption. But, Misbah called correctly, and decided to bat, lengthening the anxious wait for Amir. Pakistan's score of 282 for 6 in 87 overs was eventually build around Misbah's fighting hundred. It was a typical knock from Misbah, walking in as he often does, with his team in trouble, at 77 for 3. The 42-year-old showed extreme determination, which has been his hallmark in Test cricket, to pull his team out of trouble. For the record, Misbah remained unbeaten on 110 from 179 balls, but his contribution was way more valuable than numbers.

Even as Misbah stood out, Shafiq also played a crucial innings, to bring Pakistan back on track. Shafiq walked in with the veteran Younis Khan having given his wicket away, after doing all the hard work to reach 33. At 134 for 4, England undoubtedly had their noses in ahead. But, Shafiq, in the company of Misbah ensured Pakistan doubled the score before the next wicket fell. The two added 148 for the fifth wicket, and while they did offer a few chances, for most part, it was an effort through which they successful in keeping England bowlers at bay. Shafiq has a very good record against England, and he once again demonstrated his love for the English attack by punishing them. 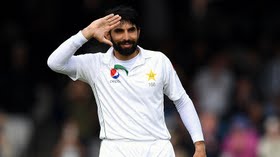 If one takes away Misbah and Shafiq's effort though, it was not such a great batting effort from the visitors. They were doubts over the opening pair of Mohammad Hafeez and Shan Masood, and they did not do much to silence critics. The pressure on Masood will grow after he fell for single figures in the innings. As for the experienced Hafeez, he would be extremely disappointed, having given his wicket after reaching 40 in rather impressive fashion. He had a great opportunity to build on, but loss of concentration did him in. Azhar Ali also tasted failure to put Pakistan under further trouble. As for Younis, he would be desperate to make amends in the second innings.

As with Pakistan's batsmen, it was a mixed day for England's bowlers as well. Woakes, without doubt, was the standout, taking out the openers, and coming back towards the end to claim two more big scalps. It was thanks to Woakes that England ended the day with honours shared. But, the others need to do some soul-searching. While Steven Finn is talented no doubt, he has too many off-days, and Thursday at Lord's was another one of them. England clearly missed James Anderson especially since Stuart Broad could not produce that big effort on the opening day. Pakistan also proved that Moeen Ali is a somewhat overrated spinner, taking him on with ease.