Gavaskar feels Bumrah, Chahal should be tried in Test cricket

Impressed by Indian bowlers' performance in the T20I series win over New Zealand, Sunil Gavaskar has said that Jasprit Bumrah and leg-spinner Yuzvendra Chahal should be given a chance in Test cricket.

"They were fantastic. They have been absolutely terrific. They had brought all their IPL experience into play, they know exactly where to bowl, to which batsman what line to bowl, what deliveries to bowl and yes, there will be that odd over when they will go for runs but they come so strongly. 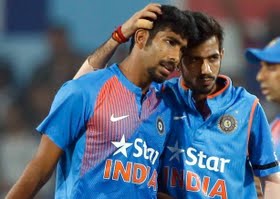 “That tells you about their (Bumrah and Chahal) big heart as well. Take punishment and then to come back and bowl deadly overs," Gavaskar told NDTV.

In the final T20, Burmah took two wickets conceding nine runs while Chahal have away on 8 runs.

"Both these bowlers have been quite outstanding and I do believe that the way they are bowling they should also be considered for the red ball format which is the Test format. Particularly, I think both of them. Bumrah for example, you know in South Africa, Australia and England he will be quite a handful with the pace and with the accuracy that he has and Chahal as well, the way he has been tossing the ball up to the odd batsman, getting the ball to turn and grip, I think both of them are ready for red ball cricket," added Gavaskar to NDTV.