South Africa defeated Bangladesh by 104 runs in match number 22 of the ICC Men’s T20 World Cup 2022 at the Sydney Cricket Ground (SCG) on Thursday, October 27. In the Group 2 Super 12 match, the Proteas posted 205 for 5 after winning the toss and batting first. Rilee Rossouw top-scored with 109 off 56 balls, while Quinton de Kock contributed 63 off 38.

South Africa lost skipper Temba Bavuma cheaply yet again, as he was caught behind for 2 off Taskin Ahmed. However, Rossouw and De Kock added a massive 168 runs for the second wicket to push Bangladesh on the back foot. Both the batters were completely dominant over the opposition as Shakib Al Hasan and co. could not find a way to stop them.

Rossouw scored his second consecutive hundred in as many T20I innings to go with the one he scored in India during the white-ball tour. His splendid knock featured seven fours and eight sixes and came at a strike rate of 194.64. De Kock followed up his blazing innings against Zimbabwe with another stellar batting effort, smacking seven fours and three sixes. 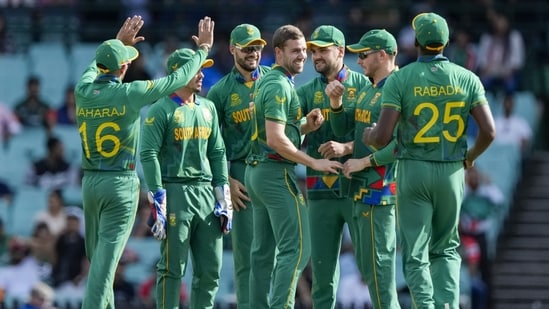 The second-wicket partnership was broken when De Kock fell to Afif Hossain in the 15th over, looking for another big hit. Tristan Stubbs (7) perished cheaply to Shakib, who also ended Rossouw’s resistance in the penultimate over. Hasan Mahmud got rid of Aiden Markram (10) in the last over as Bangladesh reduced to damage to a little extent. While Shakib claimed two scalps for Bangladesh, last match hero Taskin was off the boil, going for 46 runs in three overs.

Defending 206, Anrich Nortje (4/10) and Tabraiz Shamsi (3/20) blew away Bangladesh for 101 in 16.3 overs. Nortje dismissed both openers Najmul Hossain Shanto (9) and Soumya Sarkar (15) before trapping opposition skipper Shakib (1) lbw. Kagiso Rabada chipped in with the scalp of Afif Hossain (1) as Bangladesh lost four in the powerplay.

Mehidy Hasan Miraz (11), Nurul Hasan (2) and Litton Das (34) all fell to the guile of Shamsi, while Keshav Maharaj had Mosaddek Hossain (0) stumped. A direct hit from Rabada sent Hasan Mahmud (0) on his way. Nortje then completed the formalities for South Africa by cleaning up Taskin for 10 in the 17th over.