It was a rain-affected game at Manchester with the match reduced to 32 overs. England won the toss and asked Australia to bat first under inclement weather conditions.

The Aussies were off to a sluggish start and the innings never got going once David Warner (32 from 32 balls with 4 fours and a six) was dismissed in the 11th over. The visitors struggled at 86 for 6 in the 22nd over. It was a crucial knock from George Bailey (46 from 41 balls with 3 fours and 2 sixes) that lifted the Aussies to 145 for 7 in the allotted 32 overs. 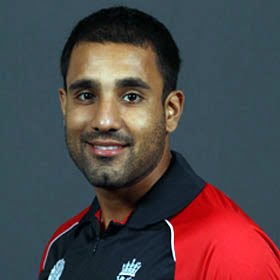 Off spinner James Tredwell, who came into the side in the absence of Swann, made immediate impact with figures of 7-1-23-2. Ravi Bopara chipped in with 2 wickets in his 4 overs while conceding only 8 runs.

England’s target was reduced to 138 from 29 overs when rain interrupted play in the 6th over with the score at 24 for 1. After the rain break, England found itself on the backfoot at 34 for 2 in the 10th over but cruised towards victory thanks to a solid 92-run stand between Skipper Alastair Cook (58 from 78 balls with 4 fours) and Man of the Match Ravi Bopara (52* from 56 balls with 5 fours). Ian Bell, who failed in this match scoring just 4 was named as the Player of the Series for his previous contributions in the series.