A performance worthy of world champions by West Indies

West Indies may have been hammered 5-0 in the one-dayers, but they proved that their World T20 win in Sri Lanka last year was no fluke, coming up with a clinical performance to get the better of Australia in the one-off clash at Brisbane.

West Indies may have been hammered 5-0 in the one-dayers, but they proved that their World T20 win in Sri Lanka last year was no fluke, coming up with a clinical performance to get the better of Australia in the one-off clash at Brisbane. True, Australia had fielded a young outfit and even handed out debuts to three youngsters, but they still had names who could overcome the West Indian challenge. Hence, credit must go to the visitors for putting up a competent show and taking back something from the otherwise disappointing tour.

Batting first, West Indies took full advantage of a weak Australian bowling, and remained dominant for most part of their innings. Although the out of form Chris Gayle fell early, Johnson Charles and Darren Bravo featured in an attacking partnership that put the West Indians on top. Charles, whose hundred in the final ODI did not result in a victory for his side, was luckier this time round and deservedly so. His half-century was a fluent effort withseven boundaries and a six as the Australian bowlers’ inexperience came to the fore. Even though Bravo was less attacking, he ensured that the alliance remained intact for a sufficient period for the dressing room to feel comfortable. 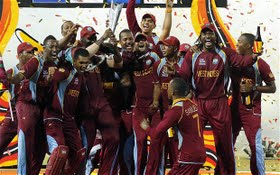 Australia fought back well, getting rid of them in close proximity of each other. The Caribbeans however did well to recover soon enough. Kieron Pollard, Andre Russell and skipper Darren Sammy all threw their bats around with a fair degree of comfort and were rewarded handsomely. Their strike rates gave a fair indication of their dominance over the Aussies bowlers – Pollard went at 155, Russell at 200 and Sammy at 285. Australia’s bowling figures also were symptomatic of their struggles in the field. Two bowlers went at nine an over and two others were dispatched at 11.

If West Indies were the better of the two sides in the batting department, the same can be said of their bowling effort as well. Once Sammy struck early, there was some good resistance from Adam Voges and Shaun Marsh. The duo gave Australia hope by batting till nearly the halfway stage of the innings. But, that is where it all fell apart. The pressure got to the Australians as both Marsh and Voges, who had crossed his half-century, got themselves run out. Praise must be reserved for the West Indian fielders as well, who created the opportunities with some good fielding, and, more importantly, took it when they came along.

Once Australia lost two quick wickets, the Windies bowlers did very well to keep Australia pinned down. Pollard and Sunil Narine were highly impressive as the hosts were unable to go after them in their effort to find the boundaries. Narine was particularly difficult to get away with his variations, reiterating again how crucial he is to West Indies’ cause in this format. All in all, it was a thoroughly professional performance by Sammy’s men, befitting of world champions.