CLT20 final: Fairy tale in store for either Sachin or Dravid

Much before the beginning of the current edition of the Champions League T20, both legends Rahul Dravid and Sachin Tendulkar had announced that the tournament will be the last time they will be seen in a professional T20 event.

Much before the beginning of the current edition of the Champions League T20, both legends Rahul Dravid and Sachin Tendulkar had announced that the tournament will be the last time they will be seen in a professional T20 event. Even though the result of CLT20 wouldn’t have mattered much to them since they have won much bigger and more significant battles, knowing their passion for the game both would have been hoping of going out on a high irrespective of the format and the importance of the tournament. With Mumbai Indians and Rajasthan Royals making it to the final, Dravid and Tendulkar can walk away with their heads held higher notwithstanding the result. 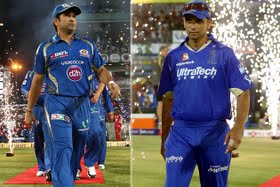 While it would be an awesome occasion to see the two stalwarts of Indian cricket together on the field for the last time – even if it is as opponents – the two teams as a whole would be keen on giving the respective legends in their side a perfect send off. It is difficult to pick a favourite among the two teams taking part in the summit clash, more so because the two sides have taken contrasting paths to make it to the game that matters the most at Delhi. On one hand, Rajasthan have been consistent throughout not dropping a single game so far, and conversely Mumbai began tentatively but have become dominant as the tournament has progressed.

There will be a few key players from either side whose performance will have a significant bearing on the final. From Rajasthan’s point of view the form of their opener Ajinkya Rahane will be most crucial. Rahane has been in exceedingly good form throughout the series, and it has been his solid knocks at the top that have ensured Rajasthan’s smooth progress in a big way. His runs have also seen it to that Dravid’s lack of runs hasn’t mattered much.

Among the other players who have made major contributions to Rajasthan’s cause include Brad Hodge, who has played some stellar knocks down the order and Kevon Cooper, who has picked up wickets at crucial junctures throughout the series. The performance of 41-year-old leggie Pravin Tambe has exceeded expectations. There will be high hopes from him in the final. Teamwork has been the essence of Rajasthan’s wins, and this has been typified by the likes Sanju Samson, Shane Watson and Stuart Binny, who have chipped in at key moments.

There is not much to preview about Mumbai. If their batting fires, they most probably will win because they have such amazing performers in their batting department. Much like Rahane for Rajasthan, Dwayne Smith has been brilliant at the top for Mumbai. In the semi-final as well, his knock was the match-defining one. Tendulkar showed shades of nick, which should encourage Mumbai. Skipper Rohit Sharma and Kieron Pollard could be the make-or-break men considering their match-winning abilities. There is not much to expect from their bowling, which has been missing Lasith Malinga.

Back to from where we began, either Tendulkar or Dravid will walk away crowning themselves in glory.