Not thinking about 1992: Sarfaraz Ahmed as striking similarities emerge in Pakistan's campaign

Under pressure to win and stay alive in the World Cup, Pakistan produced yet another impressive performance to hand Kiwis their first defeat of the tournament.

Under pressure to win and stay alive in the World Cup, Pakistan produced yet another impressive performance to hand Kiwis their first defeat of the tournament. After restricting New Zealand to 237 for 6, thanks to Shaheen Afridi's brilliant spell, Pakistan got home with five balls to spare courtesy a sublime hundred from Babar Azam.

Azam notched up the 10th century of his career and described it as his best innings. “This is my best innings. The wicket was very difficult and turned a lot in the second half. The plan was to go through to the end and give me 100 percent. When we started, the plan was to see out Ferguson but when Santner came on, the plan became not to give wickets to him and cover up later when the fast bowlers come on," he said.

“We are confident we are taking match by match, and hopefully we will qualify. We are very focussed on this," Babar went on to add. 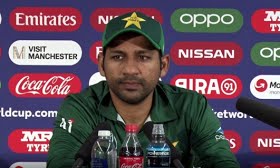 While Azam held up one end, Haris Sohail also continued his good form, blazing his way to another half-century before falling when the team was at the doorsteps of victory. Sohail's partnership with Azam shut out any chances the Kiwis had of fighting back after Mohammad Hafeez once again three it away after an impressive start.

Captain Sarfaraz Ahmed was all praise for Azam for his match-winning effort. "Credit to Babar and Haris, the way they played on this pitch, it’s some of the finest batting I’ve ever seen. It was a great team effort, we bowled well but we knew 240 was not an easy target on this pitch," he stated

Sarfaraz was also asked about the striking similarities between Pakistan's 1992 campaign and the current one, which has gone viral on social media. He, however, preferred to play down the hype.

“We're not thinking about 1992, our focus is the next match. We are very confident and hopefully, we'll do well. The crowd is always behind the Pakistan team and we didn’t do well for them in some of our previous matches," the Pakistan skipper went on to add as his side lived to fight another day.