IPL 8 44th T20 KKR vs KXIP Preview, Live Scores: A confident Kolkata Knight Riders will take on a completely shattered Kings XI Punjab in match no 44 of the Indian Premier League season 8 at the Eden Gardens in Kolkata. The hosts would be expected to win considering their good recent form

A confident Kolkata Knight Riders will take on a completely shattered Kings XI Punjab in match no 44 of the Indian Premier League season 8 at the Eden Gardens in Kolkata. The hosts would be expected to win considering their good recent form, and the success of their star players. Kolkata easily got the better of 'punching bags' Delhi Daredevils courtesy a fluent all-round. The win is their latest in a line of some impressive runs this season. Punjab on the other hand were dealt with a massive blow, and their poor season sunk further after being bulldozed by Royal Challengers Bangalore. 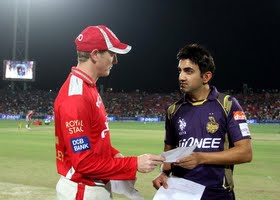 Kolkata gained a number of positives from the win against Delhi, the biggest being the return to form of Yusuf Pathan. The big-hitting batsman had scored some runs in the previous match too, but it was his batting against Delhi that reminded one more of his dazzling days. Pathan's knock was the major difference between the two sides. Leggie Piyush Chawla also came up with another impressive bowling effort to continue his good season. His four wickets ensured that Delhi were always struggling in the chase. With Sunil Narine not being available regularly owing to his action issues, Chawla has done a great job.

Narine did play in the match against Delhi, but was far from effective. The lack of match-winning spells from their lead bowler is a cause of concern, but it must be understood that the constant limelight for the wrong reasons is not helping his cause. Also, Kolkata need some of their big names to get back among the runs. Skipper Gautam Gambhir has gone a bit off the boil following a confident start while Robin Uthappa is giving away starts. Manish Pandey too is not making the best use of his opportunities.

Following yet another poor show, Punjab are all but out of contention for a spot in the play offs. Both their batting and bowling were found out against Bangalore as Chris Gayle went berserk, and then Mitchell Starc and S Aravind ran through them. To be honest, Punjab are a much better side than the kind of display they have put up this season. In fact, with almost the same arsenal, they got to the final last year, and lost out only because Kolkata were marginally better. The loss against Bangalore would have hurt their pride for sure and, as such, they would be keen to make amends.

Punjab have numerous star players in their line up, who have failed to make an impression. World Cup winning Mitchell Johnson has been among the biggest for sure. But, it is their batting, which is filled with big hitters, that has been a bigger disappointment. The dangerous Glenn Maxwell hasn't fired at all, and David Miller has only done marginally better. These two were the cornerstones of the batting last year. Skipper George Bailey too has gone off the boil after a good start, and Virender Sehwag has been so poor that he's no longer finding a place in the starting eleven. Can Punjab somehow turnaround fortunes?