Both Manan Vohra and Murli Vijay scored a magnificent half century to take Punjab home against Mahendra Singh Dhoni led side, Rising Pune Super Giants at Punjab Cricket Association Stadium, Mohali. Bowlers set the match for the home side before openers played well to provide the strong platform for the chase. Batting first, Pune had formidable start to their inning but they lost their way somehow at the later stage of the inning and posted only 152 runs in 20 overs. Punjab lost four wickets and achieved the target to get off the mark with six wickets.

Earlier in the day, M S Dhoni won the toss and elected to bat first. But Pune batsmen were not able to utilize the advantage they got after winning the toss. Ajinkya Rahane was dismissed early in the inning. Faf du Plessis and Kevin Pietersen shared a half century stand between them but they run rate was always the cause for the visitors. Though they didn’t lost too many wickets early but they were also not able to take the game away from the opposition. The batting order of Pune seemed to be one dimensional, so they addressed this and brought Thisara Perera in the team in place of Marsh and send him at No. 4. But this ploy didn’t work either. Then Steve Smith and Faf du Plessis played a bit of rescue kind of inning to control the flow of wickets. At the end when team needed them to up the ante, they perished. Pune didn’t finish their inning well and could only manage 152 runs and were short of about 25 runs at the end. 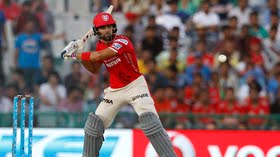 In reply, Punjab started off in a flash. Both their openers, especially Manan Vohra punished everything which was in his zone. They added 50 runs in the power play without losing any wicket to give their team a strong start they needed in this chase. Vohra completed his fifty and got out soon after when the team’s score was 97. That time the game was going towards only one direction but M Ashwin claimed three more wickets to bring the game in balance. Murgan Ashwin took the wickets of Shaun Marsh, David Miller and Murli Vijay to give Pune an outside opportunity to sneak a win from there on. But Glenn Maxwell had some other intention. He first took on M Ashwin and then R Ashwin to brought back the game again towards Punjab. His unbeaten cameo of 34 runs ensured that Punjab would claim their maiden victory of this season.

Man of the Match: Manan Vohra